After being rushed into hospital, 19 year old Dara is recovering well and knows how lucky she is to have a strong support network. 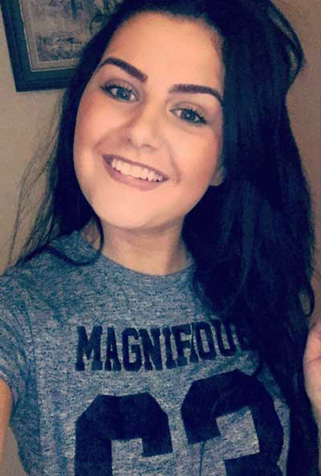 Despite teenage struggles, Dara is now on top of her diabetes.

Type 1 diabetes is something that is not caused by having a sweet tooth, as some people seem to think it is. In fact, the body’s immune system attacks and destroys the cells that produce insulin.

I was diagnosed with diabetes two days before my fourteenth birthday. I was not aware of what diabetes was myself if am being honest. Nobody in my family had it, and I was quite confused as to why I got it.

However, I was extremely lucky I was not ill. I had a urinary tract infection and my urine had a large amount of sugar in it.

From this I was diagnosed quite early and I did not have many symptoms. When I got admitted to Altnagelvin Hospital in Derry, I was questioning and blaming myself, but in fact research has shown us that the medics themselves are not a hundred percent sure to what the cause is.

Being fourteen I just wanted to be free and do what every other teenager my age was doing.

I had to make a choice that diabetes wasn’t going to get me down. I wasn’t going to let it stop me from doing what other teenagers were doing, I was not going to be treated differently from anyone else. But that wasn’t easy; I always doubted myself, it was easier said than done. I struggled as a teenager and am sure I‘m not the only one that has been in the same position I have been in.

Not many teenagers want to believe that if they don’t inject or carb count for every meal they eat, they could cause severe damage to themselves both short term and long term. From being able to eat freely to constant monitoring, insulin dosing, carb counting and adjusting, I thought my life was over. It got to the point where I did not want to believe or come to terms that I had diabetes and that I had to be strict with myself, ensure my blood sugars where above four and below eight. It all got extremely difficult for me, I did not open up to anyone or try explain how I felt, and looking back today I wish I had when I was feeling so down.

I stopped checking my blood sugars, missing injections and then began to wonder why I was sick, why everyone was on my back constantly, I just wanted to explode and give up. I knew deep down that I couldn’t give up, I had to pick myself up and come to terms with living with diabetes.

After being referred to the clinical psychologist I was persuaded to attend. She really helped me; I did not believe in myself and thought giving up was my only option but in fact it was the ‘easy option’. I was always annoyed, frustrated and really angry.

The reason I felt like this was because I felt nobody understood me nor took time to listen to what I had to say. I always said to myself unless you have lived with diabetes you will not completely understand how we feel or how difficult it can be at times. When attending these sessions every week, I was listened to without being interrupted, I was able to express myself and not feel like I was being judged.

At the end of each session I felt relief and contentment as I was finally being understood, listened to and I didn’t have to bottle it in. Everyone was looking out for me , trying to help me , support me and it was not until a few years later when I was older,

I realised that was all my family, friends and healthcare professionals were doing for me. I decided when I left school, I wanted to go on to university to further my studies. I chose Manchester and always had an interest studying there. I applied and was determined I was achieving my goal. I applied for Social Work, prepared for an interview and got a place. I always knew I could do it if I set myself goals, if I pushed myself and if I was positive. I am now currently into my second year and have loved every second of it, met so many people and lifelong friends.

However, I let myself get worried, anxious and then got sick again. It all started off with an abscess, which I thought nothing off. I then began to feel very sick and attended the local medical centre. I could barely walk or sit with the pain and after waiting a few hours I was finally seen. They give me an antibiotic but the next day I had a high temperature and kept telling myself I will be ok. I didn’t want to make a fuss; I didn’t want to bother anyone so kept it to myself that I wasn’t feeling well.

That night, Friday 21 October, I was feeling worse. I was constantly vomiting, so severely that I could not keep water down. I started panicking as I knew something was not right, I knew things where getting serious, but still didn’t want to make a fuss. I thought to myself it must be the antibiotics and I will be fine in the morning when I wake up. But in fact the next morning I found it extremely difficult to breathe I had increased heart rate, confusion, dehydration and weakness.

I managed to wake my friend and she knew something was not right and she rang an ambulance immediately. I had to be carried as my breathing was getting poorer and poorer. I could not feel my body and was becoming really upset and worried. I did not think I was going to make it and I could feel myself drifting off.

When I got to the hospital I was taken to resuscitation and monitored really closely. I was on oxygen and hooked up to multiple machines to keep an eye on my heart rate. I was so dehydrated I needed fluids pumped through my body and they could not get blood. I was poked with multiple needles, it got to stage where they had to try and get veins in my feet.

The staff from intensive care unit did their very best, they were amazing! I had an estimate of four hours survival, so I count myself extremely lucky. Days after being in hospital it was decided that I needed surgery for the abscess, which was causing a lot of pain. I was petrified, even though I am nearly twenty years of age. I just cried as it was one thing after another and I was really nervous about it.

Five weeks on from being in hospital I am well and truly on the mend. I now have a war wound which has left a lovely scar but I am lucky to be here today. If it was not for my friends that got me to the hospital when they did things may have turned out differently.

I appreciate my family and friends and how I need their support. As we know there are highs and lows, multiple injections or a constant drip of an insulin pump. Everyday there are health issues to deal. This disease has to be managed. It cannot be controlled. It may be silent to you, but Type 1 diabetics’ fight every day to survive and all you usually see is their smile.