Founder of Team Sugar Rush, Amanda explains why fundraising for Diabetes UK Scotland means so much to her. 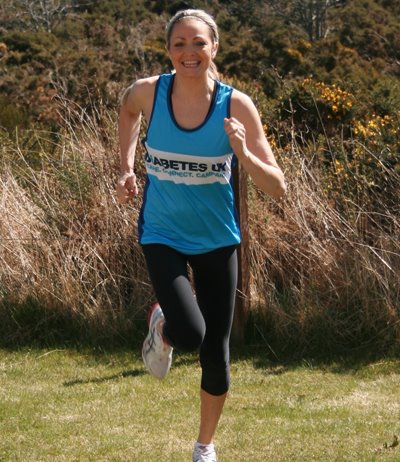 Diabetes Scotland is proud to be able to congratulate Team Sugar Rush from Inverness, who are celebrating their fourth year of fundraising success.

Led by Amanda Croall, who lives with Type 1 diabetes, Sugar Rush is a team of 120 runners who took part in the Baxter’s Loch Ness Marathon, 10K and 5K last year. They have raised more than £25,000.

Amanda is now a local celebrity in Inverness, having founded Sugar Rush in 2010 with ten runners. Since then, the team have raised almost £40,000 to help Diabetes Scotland care, connect and campaign on behalf of people living with diabetes.

Amanda truly is an inspirational fundraiser. She was nominated for, and subsequently won, the Creativity in Fundraising category at Diabetes Scotland's 2011 Volunteer Awards. She was so touched by this recognition of her work that she made a commitment to raising as much money as she possibly could to work towards a cure for diabetes. Amanda’s work meant that she was also nominated for the Supporting Diabetes UK Scotland Award in 2012 which she won.

Spurred on by these successes, Amanda was determined to up the ante for 2013 and gathered together 120 friends, family and colleagues – some as young as six – to make this year her biggest and best fundraising success yet.

2013 is the 23rd anniversary of Amanda’s diagnosis with Juvenile Diabetes. Here, she explains why fundraising for Diabetes UK Scotland means so much to her.

23 years ago our family was blindsided by the diagnosis of Juvenile Diabetes. It struck me, the youngest of the family, 11-years-old and completely innocent.

What we thought was a “virus” turned into my parents’ worst nightmare.

We were stunned. No one in our immediate family had Type 1 diabetes.  It never crossed our minds that one of “our” families would ever be diagnosed with it. But, suddenly, after months of degenerating illness, frustrating misdiagnoses and hours from a serious diabetic coma with Diabetic Ketoacidosis (DKA), I was rushed to the children’s ward at Raigmore Hospital, just in time, and in those few hours our lives had changed for ever.

It was devastating. I can still remember the day and days to follow like it was yesterday. What we thought was as a “virus” turned into my parents’ worst nightmare. However, to begin with, I continued as normal, as eleven year olds do!

As the days and weeks passed, I was rapidly deteriorating. There were classic symptoms of extreme thirst, to the point where I ran away from school to get juice; frequently going to the toilet, complete lack of appetite, vomiting, extreme weight loss (I was 3.5 stone in year seven in primary school), lack of energy, very sweet smelling breath and very scarily, I started to lose my sight - at one point I had to ask my brother what was for dinner as I couldn’t see what was on my plate.

“I didn't choose diabetes, I didn't earn it, and I don't deserve it. But I've learned to accept that diabetes is what it is. I have a choice: fight or submit. I choose to fight, and to do so with purpose, conviction, and determination.  I hope the ever-growing Sugar Rush squad can help to raise awareness of diabetes, its symptoms and treatments. Ultimately, I hope I can help educate others to make the necessary changes in their lives to live well with diabetes and live life to the max!”

You can read more of Amanda’s story and support Team Sugar Rush by visiting their Just Giving page atwww.justgiving.com/sugarrush2013.

If you’ve been inspired to take part in next year’s Baxter’s Loch Ness marathon to raise funds for Diabetes UK Scotland, you can find out more and apply for a place by clicking here.