"The better you control diabetes, the easier it appears to anyone who has no knowledge of it" 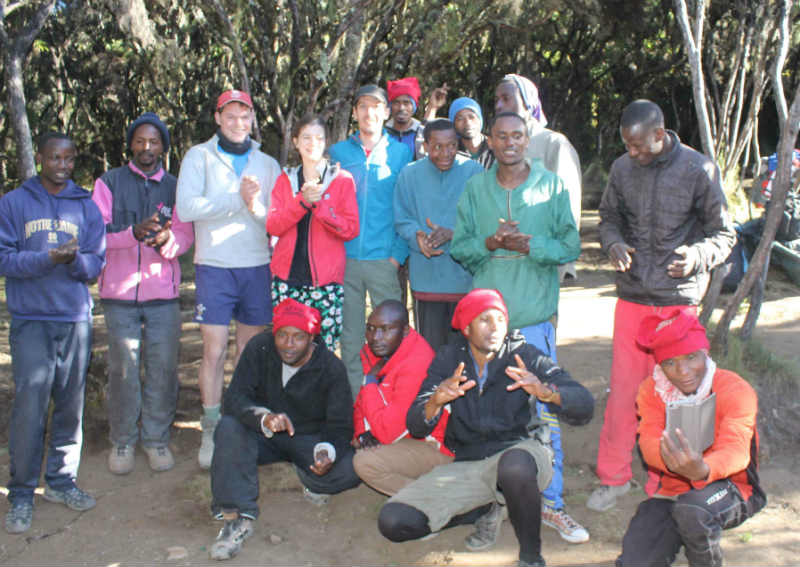 Harry, third right, with his girlfriend Evie, friend Marcus and the mountain team

My name is Harry, I am 23 and I’ve been living with Type 1 diabetes for seven years. Without doubt, it’s really tough. While I manage blood sugar levels well on a daily basis, I’m always conscious that diabetes tends to be brushed aside as an ‘easily managed condition’. I don’t believe it’s easy for anyone to manage, but the better you control it, the easier it appears to anyone who has no knowledge of it. 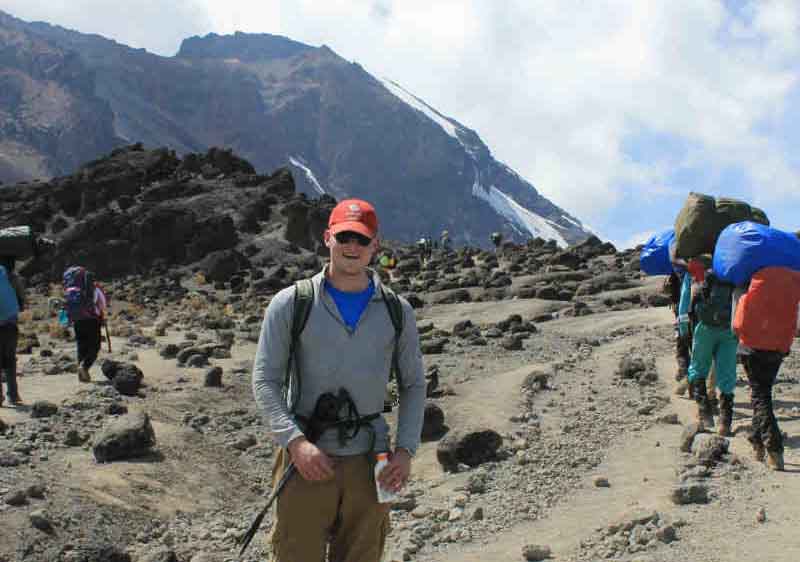 Team breaks were centred around when I needed to do a quick test.

I’ve recently had a very specific example of this in a more unusual circumstance.

I have for some time been needing a different, exciting challenge.

This summer, an opportunity presented itself for my girlfriend and me to go to Africa, and attempt to climb Mt Kilimanjaro.

Not being the most organised, it was quite a feat before I even left Britain!

I've never liked diabetes getting in the way of things, and to that end, the thought of compromising myself and possibly the team on the mountain due to diabetic issue was something I was determined to minimise. This meant close attention to packing for food, warmth and sleep.

Africa was beautiful. It was just fabulous to get out of normal life, and to experience different culture, and climate. Our guide was an African native called Fortunatus from the neighbouring city of Arusha. I felt I could instantly trust and follow his lead. Fortunatus had, however, absolutely no idea about diabetes.

I ran him through my insulin pens and blood glucose tester, and explained how I would be needing to regularly check sugar levels. I tried to explain how I might be needing sugar at times. He listened intently - and I could only hope what I was saying might stick with him. Of course no-one can understand the implications until they have experienced someone with a low blood sugar first hand. But I felt if something was to go wrong, then at least they were pretty accustomed to running/carrying people down the mountain, and of course my girlfriend Evie who is a trainee nurse, knows me very well and can pick up very quickly if I am having a problem.

Kilimanjaro is immense. The first few days trekking were hard. We were in a small group, so stopping for regular blood sugar checks was no problem. In fact, our team’s breaks were centred around when I need to do a quick test. This was great, but meant I had very little time to mentally stop as no sooner had I carefully put everything back in the right place and zipped up layers again, we would be off. I kept carbohydrates topped up at all times by having one water bottle with an isotonic/ carbohydrate mix, and regular energy gels/or ‘cliff bars’. 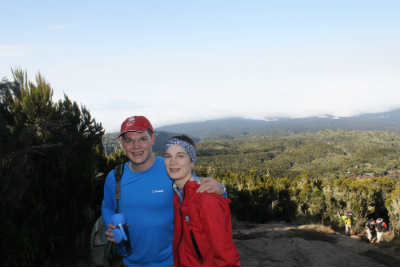 Harry and his girlfriend Evie, a trainee nurse

The morning of day three was a slight scare - at about 3100 m I suffered from quite violent sickness - the altitude was already taking effect.

Once the sickness had passed, and I had replenished sugars, I could not help but think - crumbs, if this is what is happening just over halfway, then perhaps summiting is going to be very difficult, possibly out of reach.

But getting through the next 30 minutes without major issues - diabetic or otherwise, ultimately becomes more significant than worrying about getting to the top or not. It was about managing everything – from the constant headaches from the altitude to the dehydration and the blisters: the autopilot our bodies normally run on was not enough - in that way I suppose everyone got a taste of the life of a type 1 diabetic! It’s an old adage, but one step in front of the other in all senses really was the way forward.

It was now the eve of summit night. (Believe it or not, I had come all this way with only one small hypo - on the first night in my tent as I was packing down to get some sleep. This was easily sorted by an energy gel and some coca cola). We had an early supper, around 5pm as we were getting up at 11pm to start our final ascent through the night. This is all pretty irregular in terms of blood sugar control - I halved my long acting dose and made sure I stocked up on carbs. Still, it was a real feeling of the unknown - I had no idea how my sugar levels, or in fact anything, might react at all.

11pm came round very quickly. I was already in most of my gear - it was very cold, and a bit of a wind was up at Base Camp - but after one final blood check we were off. Blood sugar of 9 - that will do.

From then onwards we marched, very slowly, through the night, over rock face and scree, through what remains of the glaciers on the mountain. I checked my blood sugar about every 40 minutes, and constantly had a gel or jelly block to suck on to replenish sugars with. I am physically pretty strong, but was very aware that one problem and the game would have been up - as in, it would not be safe and without doubt it would have been a very abrupt, possibly dangerous end to my summiting attempt.

Checking blood sugars meant three layers of gloves coming off, undoing the first two body layers (out of 7!) to fish out my testing kit from a fleecy (testing kit I kept near my body to keep warm). As soon as the test was done, very carefully you are putting everything back in its right place - all under the light of a head torch, and in about -20c with a wind, zipping up, all the gloves and headscarves back on, then you’re off again straight away to avoid getting extremely cold. Again, absolutely no mental rest. And that was it - throughout the night - just managing what was going on.

We summited at 6:23 am, literally as the sun was breaking through the clouds. Altitude symptoms, well, I think the headaches and nausea was all there, but it was strange - I just would not let them come in to my head. I was just too focused on my blood sugars not letting me down - and would you know, they had stayed between 6-11 all night! I was too exhausted to show wild elation, but just lived and breathed every second knowing that for me, this was a really big achievement.

I am obviously not the first, nor will be the last Type 1 Diabetic to climb Kili, but the challenge does not become any less for being so. I cannot go and follow my childhood dream of being an Officer in the RAF, but by achieving, dealing with, and ultimately overcoming the challenges we all face, we can develop and live to the best we can be.

Towards the end of our final night whilst celebrating, Fortunatus congratulated me with a beer saying ‘Well done Harry, you nailed it - that wasn't too bad was it’. And so Type 1 diabetes will remain to Fortunatus and his team a completely manageable condition that does not stop anyone achieving!