The most important learning is hope

“Type One? Really? But isn’t that what you’re born with?” is the response I get when I tell people I was diagnosed with the condition, aged 38 years old. I’ve learned to live with this and correct people politely, seeing it instead as education for them.

After all, when I went to the doctor, suffering fatigue and other typical diabetes symptoms, I didn’t know a thing about diabetes, never mind that there were two types!

I wish I had been able to give myself the hope I so lacked by seeing myself now, seeing that perfection isn’t always possible, that sometimes you just have to ride the storm and it’ll all come out in the wash. That it will actually all be OK in the end, even if it’s not the story you’d written for yourself in your head.

But we never listen to those around us when they tell us these things; it’s our nature to learn by experience and by our own mistakes. But if there are three things I wish I had listened to more than anything, things that two years down the line strike a chord with me, they are: 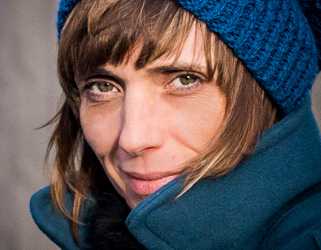 Christina's diabetes journey has given her hope.

You will get your life back

The medical staff repeated this sentiment often but blinded by anger at my diagnosis and feeling so bloody awful all the time made it hard to believe.

But I have now. It’s taken a lot of work, reading, listening, learning, attending a DAFNE education course, and now an insulin pump.

It’s not the life I had or the one I wanted for myself but I have a life and for that I am so very grateful and as such I try so very hard, despite the daily inconvenience of diabetes, to live it to the best of my ability. I wish I had believed I would get my life back; that it would, in time, be OK.

The most important thing is hope

My husband told me this during a dark period when I had none. Without it, he told me, there was no point, nothing to strive for. We all need to have hope. Living with diabetes is hard, it’s relentless and frustrating. Initially it’s around everything you do, like a wasp at a summer BBQ, your food decisions, your exercise decisions, alcohol decisions, what to do when you’re sick.

It’s a factor the first time you do anything new, holidays, Christmas, swimming, sex, stress at work: how do all these things affect my blood sugars and what can I do better next time? For so long it was hard because I had no hope. I wish I’d had more of it because in the end it was OK. With time, it was OK.

There are lots of amazing people with diabetes out there doing amazing things. One of them is Roddy Riddle https://roddyriddle.com/, who, like me, was diagnosed later in life. He says he’s never let his condition rule him, instead he rules his Type one.

Mental attitude and fortitude to diabetes is a must. It’s as much a mental condition as it is a physical one, whether that means keeping hope alive, giving yourself a break when you don’t achieve perfection, or just getting through the sheer daily diabetes grind, or just spikey numbers causing sugar rage, it’s all the same.

For me starting to mediate every day with Headspace and take up running have helped enormously. Finding a way to clear your head is a must; it’s a marathon, not a sprint. Finally, one of the things I wish I had found from the start is the amazing online community of support across social networks.

For months and months I thought I was one of only a handful of Type 1s. I never saw anyone injecting in public, and I knew only one other Type 1 diabetic. And then by luck I stumbled across the Sporty Diabetics Group on Facebook, and the online#gbdocon Twitter. I’ve never felt more supported by these online friends, when no-one else understands in my ‘real’ life, those living with Type 1 around the country and abroad are there to support my rants, celebrations, hypos and hypers. They are there to ask advice on exercise, holidays, whether changes in seasons are affecting their blood sugars too; it’s a lifeline beyond words. They help you to believe that it will, in the end, be OK.