“Things have mostly got better…”

Chris Magee looks back on 30 years of Type 1 diabetes and considers how things have changed.

“This year, 2016, marks 30 years since I became a Type 1 diabetic. In that time, some things have changed, some things have stayed the same, but things have mostly got better. Like many Type 1s, I was bedridden with a virus shortly before the physical manifestations of a diseased pancreas became evident through my protruding ribs and insatiable thirst.

For me the diagnosis was surreal rather than emotionally difficult, like the start of a marathon. I distinctly remember moments of high drama – the GP wandering cheerily out of the room as the blood test developed and running back two minutes later saying I needed to get to hospital immediately, and lying on a hospital gurney while IV drips were inserted into both arms. It was much harder on my parents, and particularly my Mum, who’d been a rock – right up until the point she had to inject me. That’s when she cracked and started sobbing. 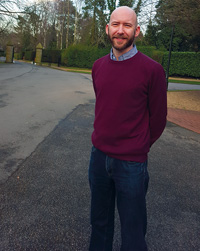 Chris Magee looks back on 30 years of Type 1 diabetes

It was the combination of everything – having a really sick child, who she had to inject with a chemical that could kill him, a ton of new stuff to learn with the highest stakes imaginable if she got it wrong and even misplaced guilt at not having spotted it sooner which bent her in two with emotion and she wept uncontrollably.

She says she was saved by a nurse who went way above the call of duty and let her inject him to practice. She stuck him with the needle and he said “Didn’t hurt.” So she did it again ”Didn’t hurt.” Again and again until her confidence was there.

At the time, in the mid 1980s, the NHS had no money so you got issued with only enough blood tests for two a day. They were plastic sticks with a patch that changed colour at one end, which you would compare to a colour chart. I’d cut them in two or three with hairdressing scissors. I think it suffices to say that this is one area that has improved. These days, I wear a (self-funded) continuous glucose monitor (CGM), which beeps if I’m too high or low and a One Touch meter for calibration.

I eat the same breakfast at the same time every day, inject the same insulin and by 10am could be on target, above range or skating off hypo. One day last week I needed no insulin for breakfast, when ‘normally’ it’s 4 units. I already eat a low carb diet, except breakfast, and I’m very insulin sensitive so need a Novopen that does half unit doses.

Sports in this context can be complicated, but it can be done. I used to race mountain bikes on a sponsored team before a severe knee injury forced me into the gym instead. I kept my sugars up as we bombed around the forest via the highly scientific method of filling a bum bag with fruit cake and riding until the cake ran out.

I was lucky to meet my wife who, as a nurse (a Queens’s Nurse, no less), sees me and the disease as separate but inseparable, and accommodates it in our daily life. She also knows that I probably won’t be going scuba diving with her unless someone makes a waterproof CGM, and the snappy and/or tactlessly honest ruminations of a hypoglycaemic brain should not be taken as my final word on any given matter. I nevertheless buy her a lot of flowers – not all of my relationships have been so understanding.

I can say with some certainty that the friends who don’t get your diabetes when you’re aged 16 will also not get it when you’re 36. For every legendary friend who will drive 20 miles to fetch forgotten insulin, there will be the twerp who eats your emergency banana. These will be the ones when you’re older who delay a barbecue for four hours or invite you for lunch and serve the food at dusk. Not terribly helpful.

And this is where my marathon continues. 30 years after the drama of diagnosis, 20 years since I busted my knee, even 10 years since I was dumped by my university sweetheart, partly citing diabetes, all the high drama of those moments has faded whilst the disease is still here like a dripping tap.

Still the first thing on my mind

It still doesn’t behave the same one day to the next. It’s still the first thing I think of in the morning and the last thing at night, and a thousand times in between, every time I move, every time I eat. On top of everything else – work stress, kids, bills, family arguments, cat vomit, spilt coffee and traffic jams, diabetes likes to tap you on the shoulder and say “Oh hey, and your blood sugar is also inexplicably 1.5” or 15.

It can be too much for people dealing with busy lives and it’s tempting to ignore it rather than face this extra responsibility, but at least now more than ever we have technology like pumps, pens and CGMs and we are connected to other diabetics online. Whilst Type 1 and Type 2 are essentially two different conditions with the same name, only 1 in 3,000 people is a Type 1, so it pretty much takes the internet to connect us.

A combination of these things really covers all the bases of emerging tech and in the cases of Reddit and the forums giving and receiving advice – I don’t know how many times I’m going to see the desperate parents of new diagnoses reaching out for help, people asking for advice on, or reviews of, technology, people celebrating their successes, anonymous people asking for advice without embarrassment and, surprisingly common, people trying to check their bodies for early signs of complications without diving headfirst into hypochondria.

Like I say, people are no longer left to stew in their own juices for a week until they can speak to a nurse or support group or, more likely, carry their burden silently. These days, the disease may still be relentless, but at least we’re less alone when figuring out how to deal with it.