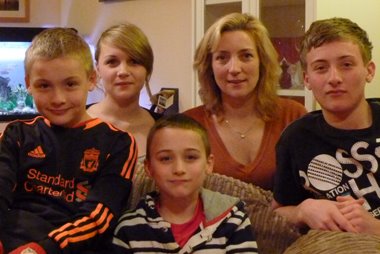 "Having just returned from the Diabetes UK family event with three of my children David (8), pictured below with our dog Charlie; Alex (11) and Andrew (15), I thought I would put pen to paper to say what a wonderful weekend it was. The hotel was very comfortable and surroundings very relaxing. The staff to children ratio was very high and I realised that for once, since David’s diagnosis, I could really relax and know that he was in good hands - hands that were more experienced than me in dealing with diabetes!  The Diabetes UK set up of the hotel was great in that everything we needed was laid on, including hypo treatments, as well as cereal and snacks at bedtime. There were clearly labelled gluten-free foods at meal times for the coeliac children. I had hoped that they may have gone one step further and measured out the carbohydrate portions to make life easier, but unfortunately not! However, having other more expert parents on hand, who could look at a plate and give a rough carbohydrate count made life a bit easier.

Glancing round the restaurant, the one thing that struck me was that amongst all these families, there was not one single adult or child who was overweight.

In fact, all the families were on the slim side and it made me think about how hidden Type 1 diabetes is.

The only clue was at meal times when various children were calling out ‘My bloods are 6.7, etc'. David’s brothers laughed when they heard this and it made us all feel like we are not alone. On the Saturday, the children were all taken out for the day to Wildwood, which was a great idea as we had no choice but to stop worrying about them and get involved in the discussion groups. There were sessions with diabetes doctors, nurses, dieticians, parents of diabetic children and adults with diabetes.

My overwhelming thought was that the weekend was not going to be long enough. I had so many questions I wanted to ask and there were so many interesting people I wanted to talk to that I wished we had more time. It was so great to hear from other parents who had different experiences to offer.

Everyone chuckled when I admitted that David’s brothers and I had snuck into the en-suite in the hotel room when we first arrived and scoffed the sweet biscuits without David realising; his bloods were so high, having been sitting in the car for two hours, that he couldn’t really have a biscuit. I was operating under the old adage: ‘What the eye doesn’t see, the heart doesn’t grieve over.’! We learnt lots from other families – mostly that other people get diabetes control wrong too, and I am not the only one! One brave little chap bared his bottom to David and I because we wanted to see what a pump looked like and where the tube went into. We talked to his Dad about how the pump had changed things for the better for them. We learnt how to carb count in practice with good ‘guesstimates’.

The weekend passed all too quickly; we made friends that I know will last a life time. Outside of session times, we stayed up late at night chatting over a bottle of wine and sharing life stories, whilst the older children hung out together and little ones finally fell asleep watching a film on the movie channel. On the final morning the children went off to sessions to talk about the effect of diabetes on the non-diabetic siblings and I think most of us wiped away a few tears when the results were fed back to us parents.

Non-diabetic siblings felt sorry for their diabetic siblings, but were glad they didn’t have diabetes! The children knew that the parents were worried about them and they felt they had to grow up more quickly because of the diabetes – this triggered a few tears. I realised that I had been so wrapped up in David and his diabetes and the constant worry, that I hadn’t stopped to consider the effects on him and his brothers and sister. We also learnt about the future of diabetes, including pumps, the artificial pancreas and stem cell research. Some of the main things I learnt were:  There is no cure for diabetes

After the weekend I came away with a new sense of confidence when dealing with David’s diabetes and I felt privileged to be part of a large Diabetes UK family. No amount of sessions with my hospital diabetes team could have given me the support and valuable lessons I learnt from this weekend away. I am so grateful I had the opportunity to go to such an event and I know that when we face new challenges such as the teenage years, I will be booking to go back again."