Exercise is how I treat diabetes

Magdalena who was diagnosed with Type 2 diabetes is determined to be even more active to keep on top of the condition.

I was diagnosed with Type 2 diabetes ten years ago. One of eight children all of which have become diabetic at 50 years' plus having had a diabetic father. I am a Yoga teacher, teach four classes every week and I am also very active. 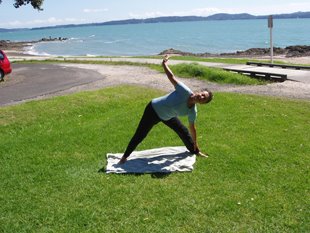 Magdalena is determined to keep active

I go to the gym regularly, cycle, walk and swim, although the latter only sporadically until I took the challenge of swimming 22-miles.

I have always been very active, have played tennis all my life, cycled or walked rather than using a car. Even though my older siblings have been diagnosed with diabetes when they reached a certain age, I thought I had escaped it, but no such luck.

How I found out was rather amusing. We were moving away from London to Birmingham and my husband has had all kinds of health problems (not diabetes, though) and he was supposed to have tests and see the doctor before we moved, he really didn't want to do it, therefore I said that I would go with him and have them as well. The day we were handing the keys over to the new owners of our house, the telephone rang and it was the doctor's surgery.

Immediately I presumed that there was something wrong with the results of my husband's tests, but no, the doctor wanted to see me regarding the results of my tests. I was given an appointment for the following day and I remember clearly that I was feeling particularly well and thought that it must have been a mistake.

When I greeted the doctor his words, literally, were "You are a very sick woman, how long have you been feeling unwell, why did you have a blood test." I calmly explained that I only had the test because of my husband's reluctance to have his and I also told the doctor that I have been feeling well all the time, what was the problem.

Then the doctor went to explain that the blood test showed the glucose to be 8.4 and that it was serious, etc. etc. I listened to all he had to say and in the knowledge that this was the last time that I was going to see him, I thanked him for everything and told him that I was very glad I was feeling so well because I had no idea that I was so ill.

When we settled down in Birmingham and registered with a GP, the diagnosis was confirmed. One thing I must say that not then and still not now, have I experienced any of the usual symptoms that diabetics are supposed to have. I was quite well informed as to the best way to deal with it. In 2001 I weighed 10 kilogrammes more than I do now.

Since I retired, I tried to become even more physically active than before: joined the local tennis club, a good gym with a very nice swimming pool, found friends to liked to cycle and walk and re-started teaching Yoga. I had become a Yoga teacher in the early 90's but due to my work in London did not have much time to teach.

I do not do diets although 70% of what I eat is either vegetables or fruit. I make our own bread using Spelt Flours and ground oats. I also make ice cream using yoghurt and fruit. I also find that the more physically active I am the less hungry I feel. Snacking was a temptation while watching TV in the evenings. I took knitting and crocheting, you cannot eat while both your hands are occupied.

Some people probably think that I exaggerate, but exercise is how I treat diabetes. I have a sister who is seven years older and who developed Diabetes 1 thirty years ago. We are very similar, she also plays tennis, cycles and does Yoga. She does have to use injected insulin, but all things considered she is in great shape and feels well most of the time. The other surving family we have, another sister who is five years younger than I but is a couch potato, not only has problems with glucose control but also feels unwell most of the time.

One last thing I would like to mention. I teach Yoga to around 50 students ranging in age from early 20's to late 60's. I always try to encourage them to do Yoga first thing in the morning to get the body and mind ready for the day. It doesn' have to be a long practice, 20 minutes to half an hour is enough. It makes a tremendous difference on how you deal with life on the day.

I have the usual twice-yearly checks of glucose control and they have been satisfactory. My GP smiles every time. One more clarification: the loss of 10k wasn't quick, I am still working to lose maybe two or three more. The Swim 22 is helping me to this end.