Steve, 27, was diagnosed with Type 2 diabetes after being treated for a rare lung disease and has developed a passion for fitness. 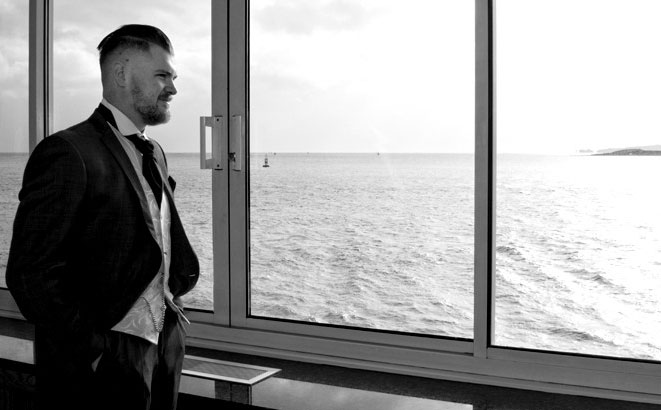 Steve on his wedding day

"Each day has its high’s and low’s quite literally, as I am still new to this condition. I was diagnosed five months ago.

It all started around new year 2015/2016, I had started to feel unwell, for me this is unusual as I very rarely get poorly. I had the flu and after weeks of flu like symptoms, I was put on antibiotics but nothing changed.

My legs, ankles and feet were swollen, to what seemed twice their size. I could barely walk, and when I woke in the mornings, I felt like my joints had seized. The flu like symptoms did not ease up, I felt like I was getting worse each day. Finally, after another visit to my doctor's surgery, my doctor told me he had referred me to the hospital.

My wife (then fiancé) arrived at the hospital at 9am, and after we found where we had to go, the tests started pretty much straight away. They took my temperature and it was nearly 39℃, to be honest it was the best I had felt in days. I was seen by a doctor and he asked me what was wrong, I explained and he tried to figure out what was wrong with me. The doctors for the last week had said I may have reactive arthritis, he ran some quick tests on me to try and determine what he thought was wrong. I then had blood tests, urine tests, blood glucose test, X-ray's the works which took all day! Bearing in mind this was five days before my wedding day we didn't imagine we would be sat in hospital all day!

I was called into a room and was met by three doctors from rheumatology with my X-ray. They sat me down and examined me again and realised what was wrong with me, I had in fact got a rare lung disease called Sarcoidosis. (Sarcoidosis is the growth of tiny collections of inflammatory cells (granulomas) in different parts of your body — most commonly the lungs, lymph nodes, eyes and skin.)

This caused my immune system to fight itself , it caused me to have arthritis, the flu like symptoms , my cough, my fever, even weight-loss. As I was trying to comprehend what they told me, I was then told my blood glucose level was high, they told me that it may just be for a little while as it can be higher when poorly. I was put on steroids to help with the inflammation of my legs, ankles etc. This was a blessing with the wedding just days away as I could hardly walk!

A day or so after starting my prednisolone my swelling reduced massively! However this had other side effects. A week after being diagnosed my blood glucose levels were 21mmol. Steroids make your bgl raise dramatically. I was getting more worried as I was not told what to do, how to lower it etc, I did not feel in control. I take several medicines to control it yet it always seems high (metformin, gliclazide, dapagliflozin),after a few of my first hypos I was getting more concerned.

My first major hypo happened the weekend we returned from our minimoon to Dublin. Me and my wife thought we would go shopping with some of our wedding money, we had a coffee in Costa (at this point I was told not to worry about what I ate and drank).

We finished our drinks and went downstairs to WHSmith, it was that moment it started going wrong, my vision went blurry, I got confused, sweating, couldn't stand up, my wife had to hold me up. I thought I had maybe got light headed but it did not ease up, I started to feel more faint, more confused, my wife carried me to our car and it was then I passed out, I woke up about 10 minutes later very confused. We got to my parent in-laws and they gave me something to eat and I started to feel better. Me and my wife were so worried. We were not told what to do in these situations. We both felt weird, left in the dark. I researched everyday ways to control it.

After being diagnosed with Type 2 diabetes I was told to attend some NHS diabetes education sessions. I mentioned to the staff that I was told my diabetes was supposed to be temporary. However as you all know it does not work like that. What had happened was my sarcoid brought my diabetes out a few decades early, I was in fact stuck with it.

I am currently going through a weight transformation as back in August 2015 I weighed 240lbs and needed to make a change, now I weigh 198lbs! Through eating healthy and bodybuilding I found that days I lift weights my blood glucose levels were so much better! As fitness is my passion since I started my journey, it has given me more of a reason to hit the gym as I feel it is also saving my life and I can get some big muscles too!! There's always a positive in every situation  After five months I am now off my steroids, I am down to 2,000mg metformin and 10mg dapagliflozin, with highs of 12/13.

I never really understood diabetes, it's a shame that I only understand it now I have it, I am 27 years old and I have my whole life ahead of me , I won't let it beat me, I won't let control my life like when I first got diagnosed. My heart feels for all the people struggling with it, but you have to stay strong and push forward .