“I get my motivation to fundraise knowing that young children and their parents have to live with this condition." 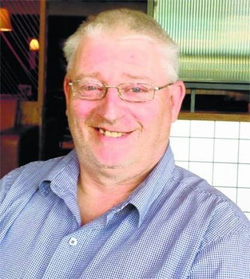 Bob has volunteered for Diabetes Scotland since 2012

Diabetes Scotland has praised the hard work and determination of Cumnock resident Bob Paul in raising awareness and thousands of pounds to care for, connect with and campaign alongside people living with, and at risk of, diabetes.

Bob has been volunteering with Diabetes Scotland since 2012, and in that time has organised teams of volunteers for bucket collections at Tesco stores in Cumnock, Galston (Ayr) and Kilmarnock, raising in excess of £5000.

He also facilitates a peer support group in Dalmellington, and hopes to start a new group in Cumnock soon.

Bob's determination to help Diabetes Scotland stems from having been diagnosed with Type 2 diabetes himself.

“I was diagnosed in July of 2012, after my wife Carol noticed a difference in my health.  After much research on the internet I came to contact Diabetes Scotland.  My main aim is to start a support/fundraising group,” says Bob. “I got, and still get, my motivation from the fact that young children and their parents have to live with this condition all their lives. Any research into this is expensive, and is vital in finding a cure or vaccine for everyone.”

Bob has organised a sponsored Walk for Diabetes Scotland at Dean Castle Country Park, Kilmarnock, on Sunday, August 24, which looks set to be a fantastic family day out. Participants can choose to walk three different distances within the beautiful grounds of the castle – 1.1km, 2km or 4.3km.

The event also features a Craft Village, a visit from Owl Magic, kiddies’ rides and inflatables, and face painting.

“A sponsored walk is so easy for anyone, no matter their level of fitness,” says Bob. “I would say to anyone considering to volunteer to get in touch with me. It is only a few hours out of your life but could change a child's life forever. I look forward to the walk and would like to see it a great success, maybe become an annual event, and the largest walk in Scotland.”

Robert has also decided to celebrate his 60 birthday in July 2015 by walking the 151 Kilometres of the West Highland way in the week leading up to his birthday, climbing Ben Nevis on the big day to raise funds for Diabetes Scotland.

Susie Williamson, Diabetes Scotland Regional Fundraiser for Glasgow said: “Bob is an incredible fundraising volunteer, and has already done so much to raise money and awareness to help others living with all types of diabetes.

Bob works tirelessly, and is one of the most motivated and driven fundraisers I have ever met. He’s a real inspiration, not just to other fundraisers but also to the people our charity seeks to support. We would encourage as many people as possible to come along to Bob’s walk at Dean Castle on August 24 – it’s going to be a fantastic event.”

You can also sponsor Bob for his 2015 West Highland Way Walk/Ben Nevis Climb by clicking here.