I want everyone to have access to diabetes education

When former nurse Christine Edwards was diagnosed with Type 2 diabetes 16 years ago, she realised how much support people needed to manage their condition - so she became a Diabetes Voice. 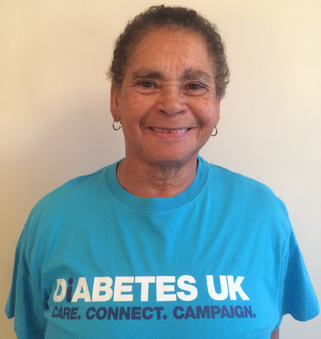 Diabetes Voice Christine Edwards wants to ensure everyone has access to diabetes education.

I was an NHS nurse all my career, and even spent several years working with people living with diabetes. So I thought I knew all about the condition.

But when I was diagnosed with Type 2 about 16 years ago, I realised just how much management, hard work and attention to detail you need to actually live with the condition day-to-day.

That’s why after joining Diabetes Voices in 2011, I became so passionate about making sure everyone has access to high-quality diabetes education courses.

AndDiabetes Voicesproved a great way to help people in my area get the chance to learn to about theirType 2 diabeteson an NHS-funded course.

When Diabetes UK held a ‘Parliamentary Question Time’ at Westminster, top of my list to ask politicians was stopping the planned closure ofDESMOND education courses in my area. DESMOND courses offer people with Type 2 diabetes the chance to learn about managing their condition, and are very well regarded.

I knew it would be a disaster if these courses stopped. Even though the decision was supposedly about cost, not giving people the chance to learn about their Type 2 diabetes only makes them more likely to develop complications, which will cost more in the long run.

When I made this point to MPs, they (thankfully!) agreed. And as MPs from my local area attended the event, they were able to get directly involved and prevent the closure of the course.That’s just one quick example of how raising your voice can make a real difference for people living with diabetes.

On top of that, the ‘Question Time’ event was a great day meeting other people passionate about all aspects of diabetes care and support from around the country. Now almost five years later the course is still running and has helped hundreds, if not thousands, of people manage Type 2 diabetes. I still go to all the sessions to give a short talk on what my 15 years of living with diabetes has been like, and it is great to see just how much people pick up. It’s not just the technical stuff either.

The best person to learn from is someone living with diabetes

Seeing that an ordinary person like me has been able to live with Type 2 diabetes for 16 years, and still live an active, happy life, is reassuring for someone just diagnosed. These courses show diabetes doesn’t have to stop you doing anything.Working with the local NHSI like getting involved in education courses as I think the best person to explain what it’s like to live with diabetes is someone living with diabetes. That’s also why I’ve worked as a Patient Representative with a range of local NHS bodies over the past 10 years or so.

The set-up and names of the bodies have changed over the years, but the role remains pretty much the same: giving the perspective of a person living with diabetes when decisions about local health care are being made. With money tight throughout the NHS, it can be difficult to make all the changes you want to see happen straightaway. But we have had some successes. Diabetes foot care is a big priority in my area as diabetes-related amputation rates are some of the highest in the country.

There’s still a lot of work to do, but because I kept raising the issue at local health care authority meetings, they did look again community podiatry services and made improvements .I hope these will help reduce the number of amputations in years to come. But there are still big problems though, including foot care in hospitals, and we are continuing to work on this.What it means to meAll-in-all I’m just glad to have been able to make a positive difference for diabetes care in my area. It’s often been hard work, but always really rewarding and usually very interesting.

Through Diabetes Voices I’ve had chances to learn more too, and the more you know the more you can help. Looking at national diabetes care trends with the National Diabetes Audit team helped me prove to my local healthcare authority that they needed to make improvements.

When I met my MP’s staff at Parliament recently I was able to raise questions about my local GP practice, as I’m part of the Patient Participation Group there. If you’re one of the thousands of people who want to get involved in making life better for people with diabetes, I’d definitely recommend joining Diabetes Voices as a great first step.