Tony Kelly, a retired teacher, who has Type 2 diabetes, gives up his time to share his experience and knowledge of the condition at dozens of events in the West Midlands. He is one of Diabetes UK's Community Champions. 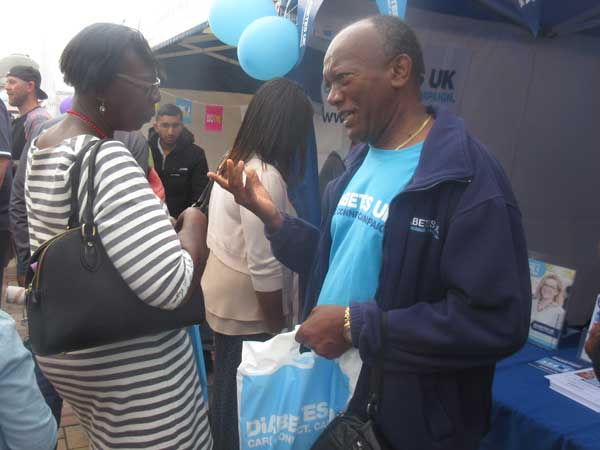 Motivating people to change their lifestyle to feel better is his task, says Tony, pictured right

"This December coming, it’s 13 years since I was diagnosed with Type 2 diabetes - an early Christmas present.

My wife noticed I was experiencing the four key symptoms usually referred to as the 4 Ts - tired, toilet, thirsty and thinner.

She kept saying that something is wrong with me but as a typical man I was in denial and refused to accept that I was feeling unwell.

However after being repeatedly told by her to go to our family doctor whose surgery is less than half a mile from our home, having not been there in several years as I prided myself on being fit and healthy, I went with an early morning sample of my urine. It was tested by my GP who later confirmed that I had Type 2 diabetes.

It wasn’t a surprise as diabetes runs in my family. Although I was born in England, I grew up in Jamaica and as a little boy had an enquiring mind. I used to regularly ask what was the matter with relatives who were either blind, had amputations, strokes, heart attacks or kidney dialysis and the standard reply was that the person 'has a touch of ‘sugar’. They never used to refer to it as diabetes – that was their way to minimise and trivialise the condition.

Back in Jamaica I had no problem motivating myself to exercise as I loved sports and the weather was always hot.  However when I returned to live in England in 1979 the land of my birth I could not stand the cold and damp weather and still do not like it. This meant that I preferred to stay indoors in the warmth instead of being my usual active self. That couch potato or sedentary lifestyle meant that I piled on the pounds and also in all honesty ate far more than I needed to especially since I have a sweet tooth.

Exercise and change in diet

After my diagnosis, I wasn’t prepared to end up with any of the complications of Type 2 diabetes I’d seen among many of my relatives in Jamaica and I changed my whole approach to keep them at bay. Hence I got into a routine of Pilates, Yoga and Zumba every week and two 45-minute work-outs at the gym. I love my wife and daughter and do not want to end up with premature death as does happen among people with diabetes who do not heed the advice given to them by their GP and diabetic nurse who both keep praising my level of discipline and motivation.

I was advised by one of my cousins who is a doctor to join Diabetes UK which until then I had never heard of. I did so and still am a member.  My wife and daughter also gave me a lot of support – encouraging me to eat healthily, and they too do likewise.

As a result, I am one of those persons who is lucky enough due to a sensible balanced diet and a lot of physical activity to have never taken any medication for my diabetes. Hardly any frying takes place in our home, although of course on the odd occasion I do have cake, sweet biscuit or ice cream, and an alcoholic  drink. I always get a good night’s sleep. I take care of my feet and in the spring, summer and autumn choose to wear various types of sandals so that my feet can breathe. 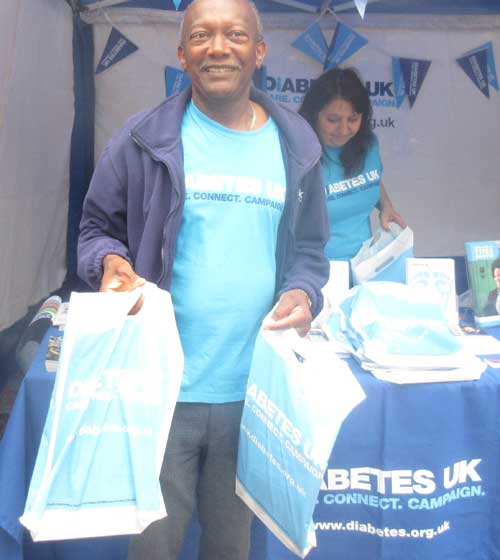 I’ve been volunteering for Diabetes UK for the past five years. It happened by chance.

In 2012, a woman called Susan Haynes-Elcock who likes to be called Diabetic Diva, was looking for a black man with diabetes to give a short talk at the launch of her recipe book for people with diabetes, in Wolverhampton. My boss at the time put her in touch with me. (She’s now a good friend).

So I volunteered to share my diabetes journey for the first time publicly at the book launch in the presence of the Lord Mayor and other dignitaries. (I’m quite comfortable at public speaking, as I come from a teaching background and did a lot of equality and diversity training to a range of staff for over 30 years until I took early retirement).

Shaleen Sandhu from the Walsall Diabetes UK office was at the book launch and made a beeline for me after I had finished speaking. She asked if I would consider becoming a Community Champion and the rest is history as since then I have taken on this mission and crusade to raise awareness of Type 2 diabetes throughout the West Midlands in seminars, presentations, and workshops. I also speak about it on several radio and TV stations and write articles for magazines and newspapers.

I am not the reactive person who sits back and waits for engagements to come my way from Diabetes UK. I go looking for organisations, community centres, Sikh temples, churches, mosques and residential homes to name but a few and invite them to engage me in learning more about diabetes including prevention.

I wear a Diabetes UK fleece or T-shirt with pride – as often as possible even when travelling on a plane or train. It’s such an ice breaker as strangers constantly come to me and ask about my connection to the charity. I have gotten so many engagements from this method and regard myself as a hoarding or walking advertisement for Diabetes UK.

Being from an African-Caribbean background and having seen the number of family members with diabetes I thought that I need to try to make a difference. Having returned to live in England, and more precisely Birmingham since 1979 I have been to numerous funerals of people in their  30s, 40s, 50s and 60s and on enquiring what was the cause of death, 8 out of ten times I am told that the person died from diabetes complications. I truly find that amazing as that should not be happening with all the help, advice, support and information that is now so readily available.

My biggest surprise is when I come across people who tell me they have been told by their doctor that they are at risk of Type 2 diabetes and when I ask what they are doing to avoid getting the medical condition, nine out of ten reply 'Nothing'.  To be told such news and not do something positive to prevent the medical condition coming their way is truly shocking.

I firmly believe in the proverbial saying 'prevention is better than cure' and my task or drive is to motivate people to change their lifestyle and feel better in the short and long run.  I practice what I preach as the saying goes. It’s is good to hear black people say how much they can relate to me with a similar cultural heritage and cultural background. It makes them feel that they are hearing it from someone who has empathy for their experiences and is not alienating, belittling, patronizing or marginalizing what they are having to deal with.

The mere fact that I am standing before a group of people gives me a buzz of excitement and seeing their faces as they take in what I am partaking to them fills me with confidence. At the start of all the training events I deliver, I use a disclaimer which states that I am not medically qualified  as some people have in the past especially when they arrive late think that I am a  healthcare professional!"