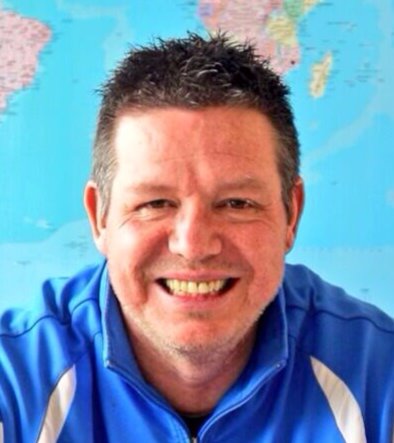 Keen golfer and amateur weatherman Iain “Windy” Wilson from Auchterarder is known to tens of thousands through his social media pages. His cheeky forecasts brighten many a rainy day – but he’s more serious when it comes to fundraising for Diabetes Scotland.

Diagnosed with Type 2 Diabetes in 2013, Iain decided to take serious steps towards addressing his health and lifestyle, and has thrown himself into raising funds to help Diabetes Scotland to care for, connect with and campaign alongside people living with diabetes.

WINDY’S BIG CHARITY GOLF DAY will be held on Saturday, September 13at Auchterarder Golf Course. 70% of proceeds from the event will benefit Diabetes Scotland, with the remainder being split between Iain’s two other nominated charities, Scotland’s Charity Air Ambulance and the 54Perthshire Scout Group.

Iain hopes that the event will raise as much as £12,000, and he is keen to share his experience of diabetes with as many people as possible.

“Through my teenage years and into adulthood I remained fit and healthy, and like most teens probably did drink and eat “junk food” excessively, not really being fully aware of any danger that may have lay ahead – we were all young, carefree and wild, and there was just no telling us, was there?!” says Iain.

“Then later on in life, things begin to take their toll. You’re not as fit and healthy as you once were. No exercise, diet goes out the window, drinking excessively. You knew though, but just couldn’t break the spiral!

“In my early 40’s, I knew deep down things weren’t right, but didn’t worry too much about it. It was through a short spell in hospital for a “flu related” illness that it was noticed that my blood sugar levels were high. Subsequently, I went to see my local GP at St Margaret’s Health Centre in Auchterarder, for some blood tests and the glucose oral test.

“My GP told me then I was borderline diabetic, and needed to change my diet and lifestyle or I’d most likely (develop) Type 2 Diabetes. Did I change my diet? No, I didn’t.”

It was through an independent medical for insurance purposes that Iain heard he needed to seek medical help as soon as possible, because his blood pressure and blood sugar levels were dangerously high.

“I went to see my GP for more blood prick tests - there was no mistaking it really, as my fasting blood sugar levels were up about 15 mmols/l. I was diagnosed with Type 2 Diabetes on Christmas Eve 2013.

“By no means a life threatening experience, it has been a major life changing experience. Since then, I’ve made considerable changes to my lifestyle with regards to exercise and diet. I’ve lost almost a stone and a half over the last 5 months.

“My diet is now made up of low sugar, low salt, and low fat foods, having cut out almost all “junk food”. My son Declan has been well informed about my condition, and often comes to help me shop, reminding me about my sugar and salt intake. I sometimes also get the odd lecture from him about how my bad habits caused me to become diabetic - the only motivator I need!”

WINDY’S BIG CHARITY GOLF DAY will be held on Saturday, September 13at Auchterarder Golf Course. 70% of proceeds from the event will benefit Diabetes Scotland, with the remainder being split between Iain’s two other nominated charities, Scotland’s Charity Air Ambulance and the 54Perthshire Scout Group.

With the help of his 65,000 followers on Facebook and Twitter, many of whom are also golfers, Iain now has 144 people signed up to take part in the event, with around £5000 already pledged in sponsorship.

“There’s far too many individuals and companies to mention here, but I’d like to thank my good friend “Jake” Riddell for helping me organise all things golf, my managing secretary “DD” Smith and Auchterarder Golf Club for allowing me to stage the event.

“Since being diagnosed (with Type 2 Diabetes), my dedicated Diabetes medical team at St Margaret’s Health Centre in Auchterarder has been extremely helpful, as have all the doctors and nurses. The information and advice I've received through various courses and seminars have been very beneficial,” adds Iain.

To find out more and to sponsor WINDY’S BIG CHARITY GOLF DAY, contact Iain atwindywilson88@googlemail.com. Donations can also be made at