Talking to your teenager about diabetes

As your child develops their adult personality, they will want to start taking control of their life. Many parents worry that their child won’t look after their diabetes as well as they do, which could make them unwell both in the short and long term.

If your child has recently been diagnosed, you’ll both be learning about diabetes and you may feel guilty that you don’t know everything. But there are no hard and fast rules when it comes to bringing up a teenager with diabetes – regardless of how long they have had the condition.

Top tips for talking to teenagers

Diabetes won't stop your child behaving like any other teenager. But there are extra considerations that make good communication even more important. 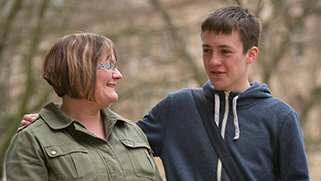 When you have the ‘birds and bees’ chat with your teenager, you also need to bring diabetes into the equation.

Make sure your teenager knows that:

People with diabetes can still have alcohol, but too much isn’t good for anyone’s health. We recommend that the maximum intake is no more than three units a day for men and not more than two units a day for women. (Bear in mind these figures are for adults.) A unit indicates the quantity of pure alcohol in a drink.

Find outhow many units of alcohol there are in different drinks.

Alcohol makes a hypo more likely, so make sure your teen knows:

No drug is a safe drug. Whether illegal or legal (nicotine and alcohol), drugs can lead to problems with health, family, friends, and the police. The best way to avoid all this is obviously to avoid drugs altogether. Drugs can affect people – and their diabetes – in different ways, depending on the type, amount and purity of the drug.Make sure your teen knows that:

Uppers can suppress appetite and, combined with dancing, run the risk of causing a severe hypo.

Smoking increases the chances of heart and lung disease and cancer.

Make sure your teen knows: