The pen is mightier...

Sheila Reith is a mother and a doctor whose experience of diabetes and work on the first insulin pen helped to change the world.

Worldwide there are now 382 million people living with diabetes – a figure that is predicted to rise to 592 million by 2035. All of those with Type 1 (around 5–10 per cent) and many with Type 2 rely on multiple daily doses of insulin to keep them alive and help them avoid devastating complications. As those who have lived with diabetes for many years will recall, insulin injections originally involved large needles that had to be sharpened by hand and sterilised before the correct dose was drawn up carefully from a vial. Aside from the introduction of disposable syringes and different forms of insulin over the years, little had changed about this laborious and painful process – even decades after the first use of insulin 1921. 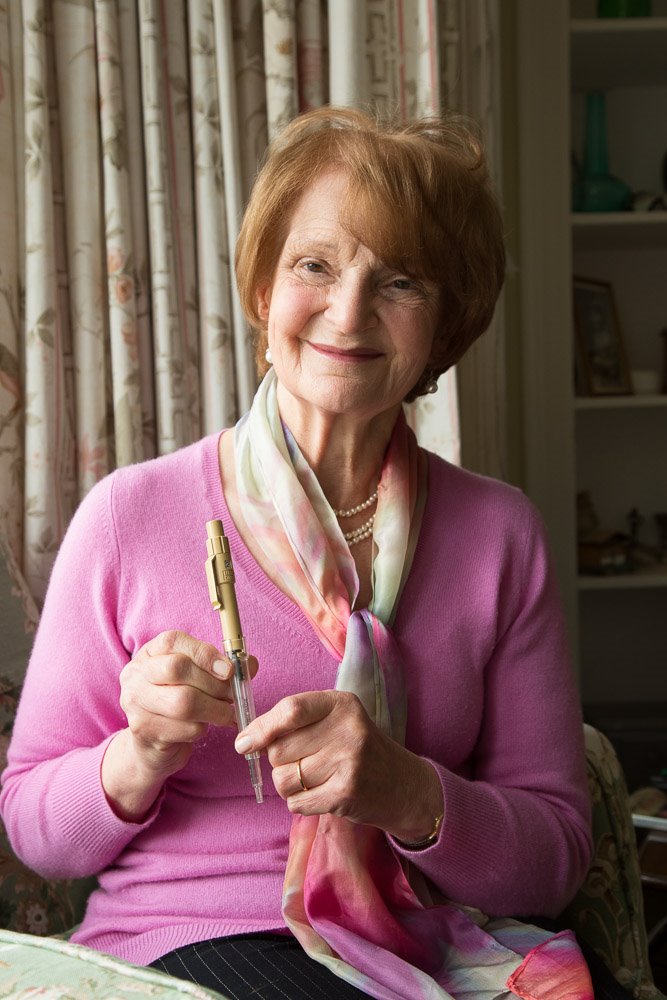 As the mother of a young child with diabetes in the 1970s, Dr Sheila Reith, a consultant physician at Southern General Hospital, Glasgow, got to know the drudgery of insulin therapy first hand.

“As a family, we had recently moved to Scotland from London and I saw how difficult it was travelling up and down with my four-year old daughter Fiona, who had Type 1. In those days you had a glass syringe and you had to reuse steel needles and draw the insulin up from a bottle – it was all very tricky,” Dr Reith explains. “I remember finding myself in the ladies loo at Euston station, trying to give my daughter an insulin injection. I said to myself: ‘This is absurd! We ought to have a simple injection device that takes insulin cartridges. We must make this easier for people’.”

In 1978 Dr Reith discussed her idea with Dr John Ireland, her colleague at Southern General Hospital, and they began work on a project that would change the face of insulin therapy and diabetes care forever.

“Initially, we went around all of the big insulin manufacturers and proposed the idea of a simple, reusable insulin pen device,” she says. “But, to begin with, none of them were interested – they all thought that the future was in insulin pumps."

A shot in the dark

"That might still be true – but back then we could see that pumps were never going to suit the needs of everyone with diabetes on a global scale.”

Determined not to give up, the two researchers joined forces with John Paton, Principal Physicist with the Department of Clinical Physics and Bio-Engineering within the Greater Glasgow Health Board and together they created designs for their own prototype insulin pen. If the pen was going to be of any use to people with diabetes, they all agreed that it had to meet three key criteria: it should be cheap to make and buy, easy to use and provide a push-button alternative to more complicated insulin pumps.

One of the first challenges to overcome was the need for a sterile insulin cartridge that could slot quickly into the pen device, deliver several accurate doses and then be replaced easily when empty. At that time, such cartridges did not exist but, after testing all the disposable syringes on the market, the researchers found a clever way around this. They took a disposable plastic syringe, filled it with insulin and simply removed the plunger. This left only the insulin-filled barrel of the syringe attached to an extra-fine needle, which the new device could be designed to fit. 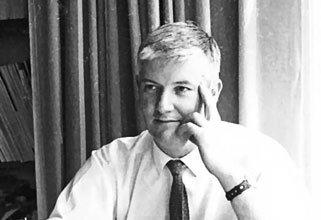 Without the advantages of modern computer-aided design, ideas for the new pen were drafted by hand. The initial prototype that Dr Reith and her colleagues came up with was a metallic tube, roughly the size and weight of a fountain pen. When fitted with one of the homemade insulin ‘cartridges’ it could be used to inject a precise dose by rotating a dial to between two and 14 units and pressing down on a button. When the cartridge was empty it could be easily swapped out with a fresh one from a stockpile kept in the fridge.

Despite concerns voiced by the Department of Health and Social Security regarding the device’s reuse of disposable syringes, the researchers’ diabetes patients were very keen to try it out. Dr Reith and Dr Ireland offered it to seven volunteers (aged between 8 and 49 years) for testing in April 1980. After using the prototype for 10 days, they could load it as quickly as they would a conventional syringe and inject easily with one hand.

Spurred on by their success, the researchers published their initial findings in The Lancet medical journal in January 1981 and began investigating the possibility of manufacturing the device on a larger scale. It soon became clear that the new pen was most likely to succeed in the hands of a company with experience of the needs of people with diabetes.

A shot in the arm

In April 1981, Steven Cox, Managing Director of Hypoguard Ltd (a supplier of many different diabetic products) agreed to take over production of the device and help the researchers bring it to market.

Dr Reith and Dr Ireland were uncertain whether people with diabetes around the country would take to an insulin pen as quickly as their own patients, and they were also keen to establish its accuracy, reliability and ease of use. In December 1981 they applied to the British Diabetic Association (now Diabetes UK) for £16,150 to support a independent trial of the device in several centres across England. The money paid for Hypoguard Ltd to manufacture 100 copies of the prototype pen and covered the cost of 5,000 Becton-Dickinson disposable syringes that could be used to make insulin cartridges. It also covered travel expenses for Sister Margaret Wilson, Community Diabetic Liaison Sister, which enabled her to educate and supervise people with diabetes in their initial use of the device. The pharmaceutical companies Novo Ltd and Nordisk Laboratories (today Novo Nordisk) generously agreed to supply insulin specifically for use in the trial.

By December 1982, 76 people with diabetes in London, Newcastle, Northampton, Nottingham and Sheffield had been able to try out the pen. Most found it accurate and reliable to use, while others found it somewhat heavy to handle or had difficulty setting the dose. Drawing on their feedback, Hypoguard Ltd brought in Bernard Sams, an award-winning industrial designer whose eye for detail helped them to refine the prototype and create an improved version in lightweight injection-moulded plastic. 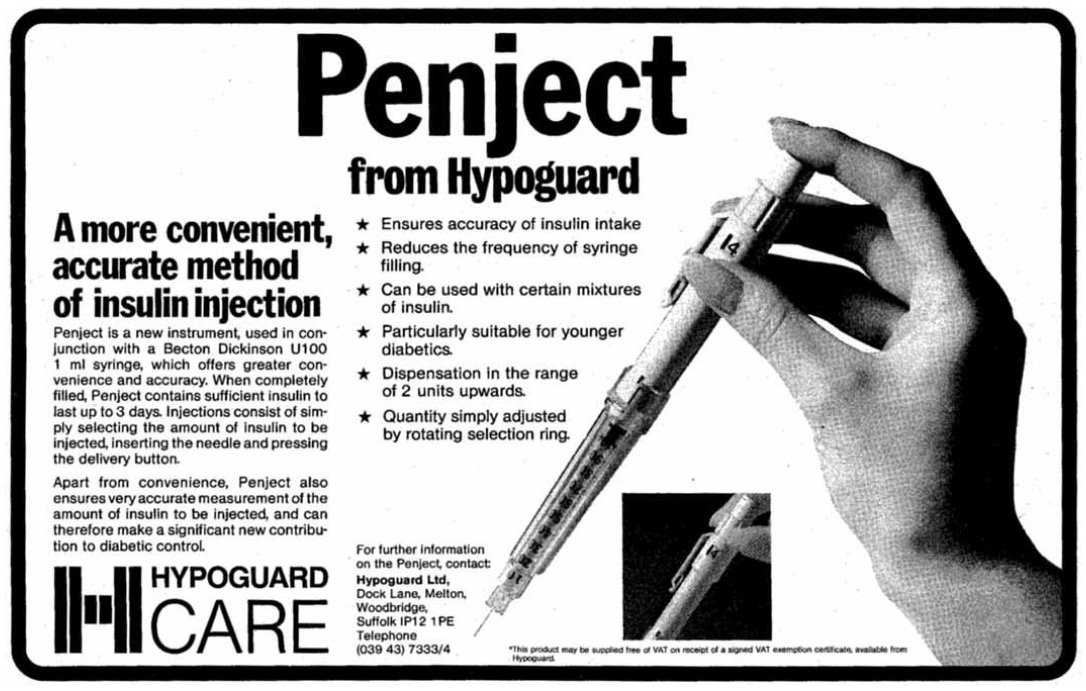 The finished product – nicknamed ‘Penject’ – became the world’s first commercially available insulin pen, going on sale to the public for less than £20 in the summer of 1983. Though still somewhat awkward to use, it achieved successful sales and brought in thousands of pounds in royalties for the Greater Glasgow Health Board. Dr Reith and her colleagues had no interest in profiting from their idea, yet an early day motion tabled in Parliament in March 1984 and reported in Hansard hailed them for setting an ‘example of co-operation between the National Health Service and private industry for others to follow’.

“The brief that Novo were working on was handed to me,” says Bernard, “and I was given three weeks to see what I could do.

A shot of genius

"I didn’t have time for a ‘blue sky’ generation of concepts, but after sleepless nights and concentrated days, I put forward a sketch to my team of the basic concept for Novopen II.”

His design incorporated elements of what had worked with Penject, but added a range of unique mechanical innovations to make Novopen II more effective and even easier to load, dial a dose and use. His sketches were approved by Novo Ltd and, when Novopen II was released in 1988, it went on to win several major design awards and sell well over three million units. In the years since, Novopen and a wide variety of similar devices have gone through further iterations and become a reliable and important tool for people with insulin-treated diabetes the world over.

In 2010, over 421,000 people were prescribed insulin in the UK alone. The majority of insulin units produced (in a global market worth over $8.8bn) are delivered using insulin pens. Modern pen devices offer many benefits, including reduced pain, increased dosage accuracy, greater flexibility and greater convenience and discretion when injecting in public – leading to enhanced diabetes management and better health outcomes for millions of people.

Despite the success, Dr Reith remains modest about the impact of her original idea. “This all started because I was worried about my daughter, who later became a successful lawyer,” she says. “It was really all for her, but in hindsight it seems like such an obvious need. We wouldn’t have got there if we hadn’t had support from Diabetes UK. And today we need to push things even harder. We need people like Diabetes UK and other research funders to push for the next lot of advances and get the government to fund them.”