On 5 July at the Edgbaston Stadium in Birmingham, volunteers from all corners of the UK came together for the UK Inspire Awards to celebrate and recognise their hard work and passion in helping us tackle the diabetes crisis.

Highlights of the day included an inspiration talk from Beth Baldwin, who along with her husband Peter and daughter Lia (nominated this year for the Young Person’s Outstanding Contribution Award) won the fundraising award last year following the tragic death of their 13 year old son Peter as a result of undiagnosed diabetes. She inspired us all with her words on what volunteers bring to their work, ‘time, experience, love and understanding’ reiterating how crucial they are in reaching our vision of a world where diabetes can do no harm. 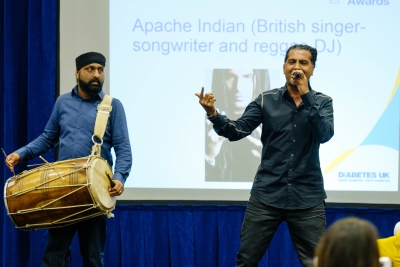 Our finalists had the best seats in the house for Apache Indian’s incredible performance, as they were serenaded to some of his greatest hits including the one and only ‘Boom-Shack-a-Lack’. Apache also spoke about his son who has Type 1 diabetes, and the importance of raising awareness within BAME communities.

Chris Askew said in his opening speech, ‘volunteers are an extension of Diabetes UK – reaching people and communities in ways we simply could not do without your help and support'. A big thank you to not just our finalists but all our volunteers for their continued support.

Read on to find out who won each category overall.

Julie won the award for her work improving diabetes care in her local area. She joined us as a patient leader in July 2015 and has worked tirelessly with key NHS organisations to improve care in Shropshire. She has initiated links with the Shropshire Community Trust, becoming the first patient to be on their committee sitting alongside commissioners and healthcare professionals.

She expanded her influence and now sits on the Patient Experience and Involvement Panel, supporting community hospitals in Shropshire.

Julie has lived with Type 1 diabetes for 34 years and has been an active member of our Diabetes Voice network. Due to complications from her diabetes, Julie is partially-sighted and has a guide dog Tammy, who has become as well-known as Julie.

The Lewis family are incredibly passionate about raising awareness and funds in memory of their son, Michael who sadly died in 2015 from complications related to Type 1 diabetes.

Michael had lived with Type 1 diabetes since the age of four, never allowing his condition to prevent him from reaching his goals and inspiring people to believe they can achieve whatever they desire.

Setting up the Michael Lewis Foundation, the family which includes Michael’s mum Cheryl, dad Tim, brother Nathan, uncle Steve and friend Chris Edwards have organised numerous events including a charity gig in Birmingham, golf days, football matches, hog roasts, a Tough Mudder and a triathlon amongst many others.

They family have inspired hundreds of people to get involved and won the award for their sheer determination to keep helping those affected by diabetes.

Reaching Out and Connecting Award

Our Foyle Diabetes Support group were chosen for the award for their bravery and dedication in supporting everyone living with diabetes.

This newly established group has achieved a great deal within a short period of time. As Derry/Londonderry is a part of Northern Ireland split between nationalist and loyalist groups, these volunteers decided to keep their support politically neutral and try to reach both communities.

A strong and supportive committee of volunteers got the group off the ground and have been building key relationships within the community, including a valuable relationship with their local Healthy Living Centre in Londonderry. Together, they aim to remain politically neutral by alternating meetings between different locations; working tirelessly to reach out and connect with all people living with type 1 and type 2 diabetes in their local area.

They have also put together excellent programme of activities, fundraising events and will be organising the Derry bridges walk later this year. With their committed members they are thriving and continuing to grow; promising an exciting future for the group and for people living with diabetes in their area.​

Sally was diagnosed with Type 1 diabetes at the age of 55 after contracting meningitis and septicaemia. After retiring she decided she wanted to use her time to help raise awareness of diabetes and help support people with the condition. She joined us as a full-time volunteer, supporting a cluster of groups in the Hampshire area.

Over the last six months, she has been a vital support in helping us to develop better relationships with our local groups and has been instrumental in establishing two new groups .

In Eastbourne, Sally helped by researching community contacts in the town to promote a group launch meeting. An unprecedented number of people turned up to the Eastbourne launch meeting, much of which is down to Sally and her innovative promotional activities. .

Sally has also supported our South East volunteering team in preventing the Winchester local group from closing, organising and promoting two public meetings to re-establish the group in the community.

Alison was a moderator of our Online Support Forum for seven years. Her commitment would be on a weekly basis, giving as many hours as she possibly could. After a diagnosis in 2009, she joined the forum and was selected to be a moderator within just three months.

She soon became the third-highest and most consistent poster, with over 15,000 post and was recognised by members for her unique sense of humour and positive, encouraging attitude, despite her own on-going health battles.

These constant difficulties with her health drove her to become a strong advocate for improving care or getting the right treatment, encouraging other members to seek support or question decisions.

Following some serious health difficulties as a result of her diabetes, Alison died on 19 January 2017.

Her huge contribution to the forum lives on and will be remembered by the many members she helped.

Alan Eastwood, Online Forum Adminstrator who was a good friend of Alison's kindly collected the award on her behalf.

Jayden’s younger sister Ava, was diagnosed with Type 1 diabetes in 2015. From the moment Ava was diagnosed, Jayden wanted to help with the care needed to make sure she was okay. At the age of 6, there was only so much he could do to help which is why his mum Adele suggested fundraising.

Since then, Jayden has participated in many events including running a mile, hosting a pyjama day at home and throwing a picnic in the park raising a staggering £1710 for Diabetes UK. Jayden’s hard work was rewarded when he won the Ward and Partners Young Fundraiser Award, and he generously donated the £500 prize money to our Type 1 events.

He is planning his next big fundraising event and Ava is keen to lend a hand and support her fantastic big brother.