The Express reported in January 2013 that scientists found that carrots are packed with potent health-boosting antioxidants that seem to prevent type 2 diabetes.

We already know that eating a healthy, balanced diet and keeping to a healthy weight are key to reducing the risk of type 2.

However, the new findings shed light on the interaction between our genes and the content of the foods we eat and their impact on our risk of developing this condition.

Researchers from Stanford University in California found that, in people with particular common genetic variations, high blood levels of beta carotene, which the body converts to a form of vitamin A, might lower the risk of type 2 diabetes.

They also found that high levels of gamma tocopherol (the major form of vitamin E in the diet, found in vegetable oils, nuts, seeds and wholegrains), might increase the risk of type 2. 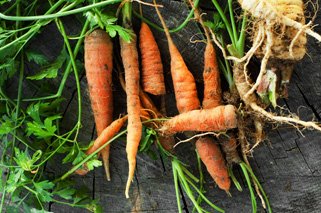 The research, published in the journal Human Genetics, focused on the interactions that occur between the specific genetic variations found in different individuals and blood levels of key substances that have previously been linked to an increased risk of type 2.

On their own, none of the genetic factors showed an impressive impact on type 2 risk. But when paired with the antioxidants, there were significant results.

These findings highlight the need for further studies to find out if beta carotene and gamma tocopherol are protective or harmful themselves, or if they are simply markers associated with the true causes of type 2.

Dr Richard Elliott, Diabetes UK’s Research Communications Officer, said, "This tells us more about the genetic and environmental factors that cause type 2 diabetes, but doesn’t provide enough evidence for us to recommend changes to the vitamin content of a person’s diet.

"Large-scale research is needed to detail how external elements, such as certain foods, interact with genes to increase a person’s risk of developing the condition.

"What we already know is that following a healthy, balanced diet and taking regular physical activity is the best way of reducing type 2 risk."