Michael Evans has Type 1 diabetes and is currently taking part in our Swim22 challenge. He’s been involved with Diabetes UK and our work for many years, read his story below. 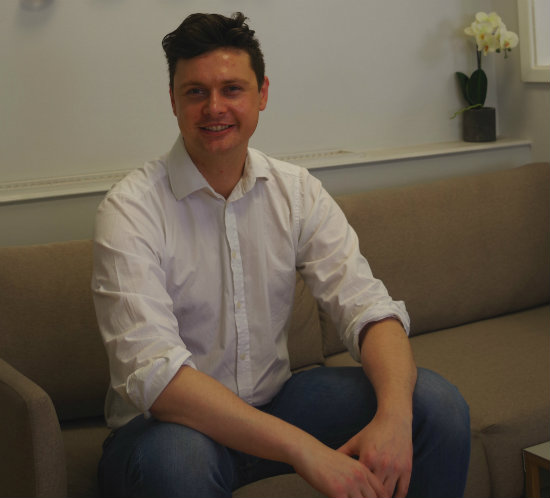 “I was diagnosed at 2 years old with Type 1 diabetes, and throughout my childhood and into my late teens I was having hypos at least 5 times a week and often at night. At 16 I was one of the first people to take part in DAFNE when it was still in the trial phases and it changed my life. Something had to be done to control my hypos, as I would shortly be moving away from home for University and I wouldn’t have my parents and friends there to rely on to help me.”

I like to live a healthy lifestyle and not let diabetes stand in my way, doing Tough Mudder, survival of the fittest events and now Swim 22.

“I first heard about Swim 22 at a Council of People Living with Diabetes meeting, when Chris Askew the Diabetes UK chief executive told me he was doing it and said how it is open for others to join. At first I was thinking a definite no, but then when he said it’s not 22 miles in one go I was more open to the idea. After thinking about it for a week I decided I wanted a new challenge and I thought it’s also a great way to try something new, keep fit and support Diabetes UK at the same time.”

“So far I am finding that the challenge is going well. I was surprised how many lengths I can get done in one go. I’ve always been able to swim and used to swim for my school but I’d never swam as a form of exercise. So this is a new and quite relaxing thing to do, especially after a long day in work. It’s quite cathartic to get into the pool, challenging myself to swim a certain amount within a certain time period and then achieving or exceeding it.”

“My biggest highlight so far was when I realised I had swam 1.5 miles in one go! I got home and was working out the distance from the lengths I had done that morning to update my record sheet, I assumed it was wrong so I worked them out again and got the same result. So that surprise and personal achievement has really pushed me to keep on swimming. Also there is a lot of support from other participants across social, so that’s a great encouragement and it’s good to see how others are getting on.”

Helping other young people with Type 1

On top of all his fundraising, Michael has been actively involved in Diabetes UK’s projects and is now influencing our board of trustees as part of our Council of People Living with Diabetes.

“Diabetes UK started several Type 1 youth projects and I became a founding member of Type1uncut. We made videos about all sorts of stuff - from awkward chats about sex, to tips on dealing with over-caring parents, to rants about how badly they deal with Type 1 on TV. Our one rule, don’t sugar coat!

From this I was asked to join the Council of People Living with Diabetes, which I am now an active member of. I’m one of 30 volunteers, all of whom have experience of living with diabetes or caring for someone with the condition, who act as a sounding board for Diabetes UK’s Trustees and senior staff. I’m now a very active member and have made lots of friends through. Meeting other young people with diabetes (“dia-buddies” someone came up with the name!) has really helped me mentally and with general day to day life of living with diabetes. I’m really keen to help more peoplelet diabetes control their life.”

“For anyone who was thinking of supporting Diabetes UK or signing up to Swim22, I would say DO IT! It really doesn’t matter if you’re a strong swimmer or not. I’m definitely not a strong swimmer and do all my lengths in breast stroke (as when I try to do front crawl I look like I’m having a hypo from all the flailing arms, legs and splashing). You also get a snazzy blue Diabetes UK swim cap to keep you hair dry!”