There has been an estimated 75 per cent increase in Type 2 diabetes in London over the last decade, according to a report released yesterday by theLondon Assembly Health Committee.

The report, called‘Blood Sugar Rush’ – Diabetes Time Bomb in London’, was launched in Trafalgar Square yesterday morning and calls for an integrated approach to diabetes prevention and care in the capital.

London rates higher than in many parts of the country

The report claims that the number of cases of Type 2 diabetes in London is growing faster than anywhere else in the country and makes the following recommendations:

Diabetes UK’s Regional Manager for London, Roz Rosenblatt, was involved in shaping the report by contributing to the Assembly’s consultation paper and giving evidence at both of the Health Committee’s meetings last year. She has welcomed the report recommendations. 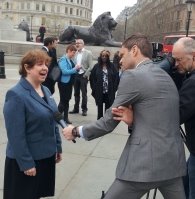 Speaking at the launch of the report, she said: “We welcome this report, as it reflects our concern about diabetes as a major and growing health crisis. The number of people living with diabetes is on the increase across the UK, but in London the rates are even higher than in many other parts of the country.Brent, for example, has the highest rate in England,with one in 10 people there thought to have the condition.

“It is also alarming that there are an estimated 140,000 people in London with Type 2 diabetes who haven’t yet been diagnosed. The fact that they are not getting the support they need to manage their condition, this could be putting them at higher risk of devastating health complications, such as heart attack, stroke, kidney failure, blindness and amputation.

"Diabetes needs prioritising across all boroughs"

“We’ve been working hard with local CCGs and councils to try to make sure that people with Type 1 and Type 2 diabetes get the best possible NHS care; that people living with the condition are diagnosed as early as possible; and that there is a greater focus on preventing Type 2 diabetes. That’s why we welcome the report’s focus on the need for a ‘joined-up’ approach to diabetes.

“We are calling for action to be taken by all CCGs and Local Authorities on reducing the obesity rate, risk assessment and early diagnosis, access for people with diabetes to all 15 of their Healthcare Essentials, education for self management and delivering integrated care pathways between primary, community and secondary care.

“We have seen in areas such as Tower Hamlets and Newham that when diabetes care is prioritised, it is possible to have a real impact on the health of the people living in those areas. This needs to be happening in all boroughs across the capital because otherwise the people of London and the NHS will be in real danger.

“We look forward to supporting local authorities and CCGs in taking forward these recommendations and would urge that progress on these is monitored and outcomes evaluated on a regular basis.”

NHS is dealing with consequences not causes

Diabetes costs the NHS around 10% of its total budget, 80% of which is spent on treating complications of the condition.

Dr Onkar Sahota, Chair of the Health Committee for the London Assembly, said: “Dealing with just the consequences of diabetes, and not what is causing it, will continue to consign as many as 750,000 Londoners to a life of trying to control an avoidable long-term condition.

“Healthcare providers and government have a role to play in reversing this growing crisis, as does the food and drink industry."

Diabetes UK already works closely with a number of organisations, including the Royal Colleges and through the Strategic Clinical Network for Diabetes and the Academic Health Science Network, to promote and disseminate good practice models and educations standards to improve the quality of care for people with diabetes in London and across the UK.