Diabetes and being a father

What does it mean to be a dad with diabetes or a parent to a child with the condition? To mark father’s day four father’s share their thoughts. 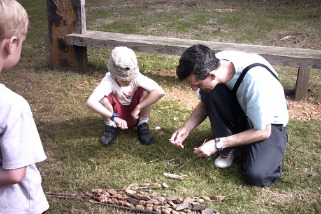 Comedian and author Olly Double is dad to two teenage boys who both have Type 1 diabetes. Olly lives in Kent with his family.

This was not the kind of turn-your-life-upside-down experience we’d had when his younger brother Tom was diagnosed in December 2000. With Joe, we knew all the signs, so we picked it up nice and early.

"It was Sunday evening. We noticed that he was guzzling water from the tap after cleaning his teeth, and he asked why he was having to go to for a pee so often. Pretending it was for a kind of game, we asked him to try testing his blood glucose with Tom’s testing kit. When the reading told him that his blood sugar level was around 24 mmol/L, he and Tom thought it was the funniest thing ever. They were shouting with laughter. "Jacqui and I just exchanged glances. We knew what it meant even before taking him to the out-of-hours doctor to have it confirmed. Unlike the fear and anguish unleashed by Tom’s diagnosis, this time I just felt a dull, weary sadness."Joe only had to stay in hospital for one night. They said he was the most “well diabetic” they’d ever seen. I remember thinking that “well diabetic” sounds like a phrase that a streetwise teenager might use – “Bruv, you is WELL diabetic!” We went home the next day, and got on with our lives. "Our first dilemma was that we had planned a short camping trip for the following weekend. Should we still go, given that Joe would have been diagnosed for less than a week? He would still be getting used to insulin injections and blood glucose tests, and we would be right in the middle of trying to work out what his regime should be to keep his levels under control."There was only really one decision we could make. We had to go ahead with the trip. Otherwise, we would be giving both the kids a terrible message – fun is impossible unless you can produce your own insulin. "So we went ahead with the camping trip, at a little farm near Tunbridge Wells. I can’t pretend that things weren’t complicated by incorporating Joe’s newly-diagnosed condition, and I do remember the weary sadness hanging over me a bit. But we actually had more problems with being cold at night – through not having taken enough blankets – than we did with diabetes. Eleven years on, the things I remember most vividly are baking foil-wrapped potatoes in the campfire, and Joe and Tom making lightsabers by wrapping some of the foil around sticks. "That Sunday was Father’s Day, and even in the middle of all the upheaval, Jacqui had found time to take the boys into Whitstable to choose presents for me. Joe had got me the Gorillaz’s second album, Demon Days. As he gave the CD to me and looked up at me to see if I liked it, I felt really appreciated as a dad – and diabetes can do nothing to spoil that memory." 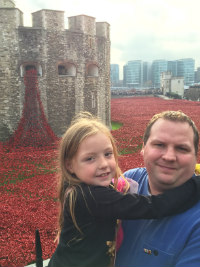 Simon Barcz, 36, was diagnosed with Type 2 diabetes 6 years ago. Simon is married and lives in Derby with his wife and children.

"Well, where do I start? I suppose I’d have to start with my own father who we’ve just had his 10th anniversary of his passing. He was a Type 2 diabetic and died from blood poisoning (septicaemia) from an infection, which by all accounts was not helped due to his diabetes. I’d still never really given the disease much thought until I was diagnosed four years later.

"My nurse warned me that I would die early and asked whether I wanted to see my children grow up. I am still only 36, I’m married and have a 9 year old girl, Keira, and a 19 year old boy, Luke. Both of them worry about me as does my wife.

"It’s funny my daughter reads the labels on food now and understands how much sugar is in certain foods and that it’s bad for you where as the boy is at an age of indestructibility. I do find myself preaching to them as well even though I’m not always good when the weekly shop has newly entered the cupboards. Now I run marathons with the support of my family and I hope that I am inspiring my children to start and stay healthy a lot earlier than I did because who knows what damage I might have done. However, hopefully I’ve started to reverse some of that and will see my children married and happy and maybe some grandchildren. 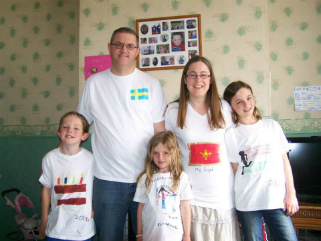 Steve Paxton, 45, is dad to Francesca, 13, and Jacob, 11, both have Type 1, and Hanna, 8. They live in Nuneaton, Warwickshire. He is a self-employed driving instructor.

"One morning, she had deteriorated, so my wife took her to the doctors. She had even written down the symptoms so she didn’t forget any! The doctor didn’t seem too concerned and gave her a form to take to the hospital for a blood test. We couldn’t do it that day as it would have been closed by the time we got there. We took her first thing the next morning (very fortunately, as it turned out), by which time she was even worse, to the point where I had to carry her through the hospital. I will never forgive myself for not taking her straight to A&E instead!

"Things happened quickly and two hours later, she was being rushed back to hospital in an ambulance in a life threatening condition. Later that day, she was transported by ambulance to the high-dependency unit at the neighbouring hospital. She spent one night there before returning to our local hospital. Nothing was going to be the same ever again! Five days later, she was back at home and our new lives had begun. Little did we know then that it wasn’t over yet."A few months later, we became concerned about Jacob so we arranged a blood and urine test. Both were clear but we remained suspicious! Sure enough, one evening when we were testing Francesca’s BMs, Jacob asked to be tested, too. The reading? HI! We packed an overnight bag and I took him to A&E for the inevitable diagnosis. The hardest moment of my life came when my five year old little buddy looked up at me and asked me if he had diabetes too. I wanted to lie, tell him everything was going to be ok, tell him he would get better, but I knew I couldn’t do any of those things! I had to look him in the eye and say “Yes, mate, it looks like you have.”  "Both adapted brilliantly, although not without complaint, to the hand life had dealt them and are now taking on life and thriving. Hanna is a constant source of worry; we keep a close eye on her and she has had her BMs tested many times but so far, so good. "The hardest part is at the beginning. Everything is new and you are bombarded with information as well as having to make major adjustments to family life, but it all soon becomes routine to the point where you don’t notice. I do lots of volunteer work which helps me deal with it. You’re never alone, there is a great community out there " 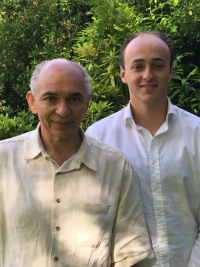 Roy Johnson, 64, from Guildford, Surrey and his son Pearse, 22, were both diagnosed with Type 1 diabetes when they were 13 years old. Here father and son share their stories.

Roy says: “Of course I worried about a child of mine being more likely to develop Type 1 diabetes because of the genetic link but to be honest you just keep your fingers crossed and hope it doesn’t happen.

"But instead of staying in hospital for three weeks like I had back in 1965, Pearse was in A&E at 8pm on Thursday night and out by lunchtime the day after!"My parents knew nothing about the condition and if I’m honest they let me get on with it by myself. I think the attitude was I was a sensible boy and could handle it. But I’m glad I’ve been able to talk about it with Pearse and he has coped so well. "I’ve lost three toes as a result of my diabetes and if I start getting too bossy Pearse will tease me and tell me I shouldn’t be lecturing him because I’ve got complications. To be honest I’m really proud of how he handles his diabetes – long may he continue.  Pearse says: “I don’t want to make light of the condition but I can’t say it has significantly impacted my life. I’ve always just powered through. I’m relatively well controlled, I’ve got a pump and the key thing for me is checking I’ve got a spare cannula just in case the one I’m using when I play rugby gets pulled out.“I’m studying at St Andrew’s University but to be honest I haven’t found the transition to student life too hard to deal with even with the late nights and enjoying a drink. I managed my diabetes while I was away travelling during my gap year so being away at university doesn’t feel like that much of a novelty when it comes to my diabetes. I make sure I still get my checks and see the doctor when I come home in the holidays though.“I see the fact we’ve both got Type 1 as an element of my relationship with my father but it’s just a small part of who we are when we’re together. As I was growing up he was always been on the touchline watching me play rugby and although we can sometimes rely on each other for the odd bit of equipment or advice when it comes to our diabetes it’s just one aspect of our lives.”