Diabetes UK were among the charities who marked the 90birthday of their Patron, the Queen, at Patron’s Lunch events held across the UK at the weekend.

The Queen became Patron of Diabetes UK in 1952, and the charity and its supporters took this opportunity to celebrate her longstanding support for the charity’s work.

The main event saw Diabetes UK join over 600 charities at a televised street party on the Mall near Buckingham Palace on Sunday, where 10,000 supporters gathered for a special picnic and parade.

Read more on the build-up to the Mall eventhere.

Community events were also held all over the UK in celebration of the event, including local lunches. 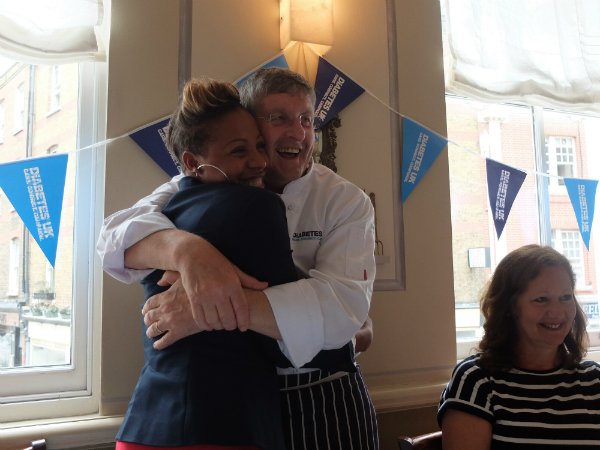 Last year Giancarlo found out that he was at risk of developing Type 2 diabetes and made radical changes to his diet, losing a stone and a half in the process.

Maintaining a healthy weight through eating a healthy diet and getting plenty of exercise can help to reduce your risk of developing Type 2 diabetes, or to manage the condition if you already have it.

'A cause close to both our hearts'

Giancarlo Caldesi said: “Katie and I were really happy to organise this special Patron’s Lunch for one of the Queen’s charities, Diabetes UK, as it is a cause close to both our hearts.

“Since being told I was at risk of developing Type 2 diabetes I have drastically changed the way I eat. I know now how to balance my food and resist those cravings for sugary foods. I can see now how the feeling has come back in my eyes, fingers and toes. I wish I had known about Type 2 diabetes before. We both thoroughly enjoyed the day as it combined great food and great people.”

Katie Caldesi said: “Giancarlo and I feel that this special event at Caffé Caldesi was a great way to say thank you to Diabetes UK supporters and celebrate Her Majesty’s birthday. In addition to this, the dishes on the menu such as the pea and mint frittata and the strawberries, rosewater cream, raspberry chia coulis, and vanilla oil were created in line with Diabetes UK’s belief that you can eat healthy meals which can still be delicious. It was a great day.”

Matthew Patten, Interim Head of Major Supporters at Diabetes UK, said: “The Caldesis ran an event fit for the Queen in honour of her birthday, and we send our thanks for their efforts. It was a great way to showcase how to eat delicious food that is also healthy, and Giancarlo and Katie proved to be fantastic hosts for our supporters celebrating the Patron’s Lunch.”