Diana Oakes from Alwoodley joined hundreds of people across the UK who turned up to work in 30October in fancy dress to raise money for the charity.

Diana, who works for the Lloyds Banking Group at its Leeds office, and has Type 1 diabetes said: “You can imagine how fun it was to type all day with scissors for fingers and to be on conference calls, to test my blood sugars and to also be the only person in the office dressed up!

An opportunity to ask about diabetes

"While the money was raised for an important cause, the event also provided awareness and an opportunity for me to answer people’s questions about diabetes.” 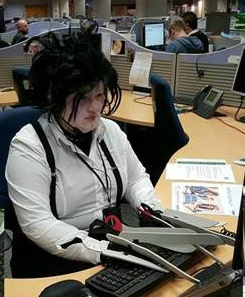 Her outfit, which was drawn out of the hat from suggestions made by colleagues in Lloyds Banking Group’s PPI Operations offices across the country, snagged the top prize of a brand new iPad2, kindly donated by Asendia.

She said: “Those who know me were sure I would take part, as I like to dress up at Halloween. However, to raise the stakes, the choice of costume was taken out of my hands, with hundreds of colleagues being asked to provide suggestions and sponsor me.”

Diana was diagnosed with Type 1 diabetes at the age of 11 and has been a long-time supporter of the charity as a volunteer public speaker and as a Diabetes Lead for Lloyds Banking Group’s Access Disability Network.

With the support of colleagues, she has helped raise over £4,000 for Diabetes UK, with a further £232 raised by dressing up for Dress Diabolical.

In the lead up to the competition, Tim Burton expressed his support for the competition saying: “The strange picture of ghosts, goblins, pirates and vampires walking the streets of the UK appeals to me on many levels. That it’s to raise money for a good cause is even better. I hope everyone gets creative, and that Dress Diabolical is a big success, raising plenty of money for Diabetes UK.”

Natalie Fischer, Development Manager at Diabetes UK said: “It wasn’t ‘shear’ luck that snagged Diana the prize, but the huge amount of effort and imagination that has clearly gone into her costume. Thanks to Diana and her colleagues, the money they’ve raised will help us to care for, connect, and campaign alongside the millions of people currently living with diabetes in the UK.”

Diana added: “Diabetes is a cause close to my heart, I am happy to have raised money to help all those living with diabetes in the UK, as well as having a bit of fun along the way.”