How I climbed back to health

Bruce at his biggest

Congratulations, what a difference a year makes! What made you decide to lose the weight?

I simply got really fed up of being so fat! I became a barrister in 1992 and from then on, due to my sedentary lifestyle and pressure at work, I started to pile on the weight. At one point I was having to deal with the death of my sister and my father as well as my divorce, and to be honest I was just eating and drinking too much. I ballooned and then continued to get bigger and bigger.

Having lived in the States, I came back to the UK and met my girlfriend, Sue, three and a half years ago. She put on two stone just being with me! I knew I needed to do something. I’d been into mountaineering when I was younger but now I found even walking from the car into Tesco difficult. My feet really hurt.

When were you diagnosed with Type 2 diabetes?

It was about five years ago, when I was 50. To be honest it didn’t shock me. So many friends were in the same boat I suppose I thought it was quite normal and just part of getting older and the lifestyle I had. 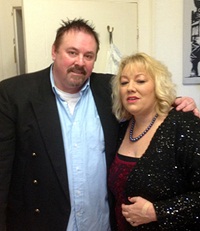 Being my girlfriend led to Sue putting on weight too

So how did you decide to lose the weight?

I went on the Atkins diet at first and lost a stone in three weeks, but I didn’t feel well on it. A friend who had also been really heavy but had lost lots of weight and just run a marathon told me to get myself down to Basecamp Fitness Centre in Ellesmere. Jamie and Danni Evans looked at my diet and asked me what my goal was. I told them my dream was to get back out on the hills again.

They helped me turn that dream into a reality.

Tell us what you’ve achieved?

My desire to climb again is what’s driven me. That’s why dieting alone doesn’t work. You have to decide what your motivation is. It might be wanting to play football with your children or to go for a run. You need to figure out what it is that drives you and then set yourself goals.

In the past year, Sue and I have done loads of climbs including Snowdon, Tryfan, the Berwyn range in Snowdonia, Mam Tor in Derbyshire and Skiddaw in the Lake District. Even right at the beginning of my weight loss I started going out on the hills and setting myself a new challenge. Now to keep fit I run with a pack on and I do spinning and cross-training at the gym. One of the toughest things I’ve ever done was a 24 hour spinathon last November, I cycled 500 kms and I only got off three times to go to the bathroom. 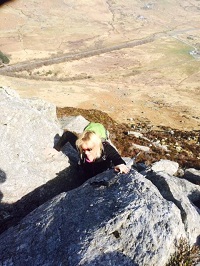 Sue has embraced climbing too!

What else have you got planned?

Next month Sue and I are going to climb Mount Malhacen in Spain, it’s the third highest peak in Europe.We will be climbing the East Ridge, spending a night on the summit, and then descending the West Ridge. We’ll be asking people to sponsor us to complete this challenge to raise money for Diabetes UK atjustgiving.com/Bruce-Drummond1/

At the end of this year we plan to climb Kilimanjaro. After that we might climb Aconcagua in Argentina and possibly Mount Rainier in Washington in 2016, and I want to run the Brighton marathon. The plan for 2017 is a lot of Alpine climbing with the eventual goal being Everest.

I know it sounds out of reach but I really don’t believe it is. I may or may not be able to achieve it but that is my goal and again I’d like to fundraise for Diabetes UK. This goal is what gets me on the spin bike or out for a run in the pouring rain. I am building my training and goals up into bigger and bigger challenges and this is the ultimate one.

So how do you manage your diet now?

For the most part I try to eat healthily but I don’t deny myself everything. I barely drink alcohol, but I will treat myself to the occasional fish and chips or a Chinese if I’ve done enough exercise to feel I can do so. I don’t miss the food and the lifestyle I used to have because I feel my life has been so enriched by what I’m able to do now. I have kept my old dinner jacket, trousers and a pair of jeans just to remind me of how far I have come - I’ve had to get myself a completely new wardrobe.

I understand your story has just been on TV?

Yes, I was approached by Big Centre TV who wanted to cover my story. I started out as a musician and played with  John Gilbert from Manfred Mann and John Verity from Argent, and with people like Rita Marley. I still play with a group called Loose Hounds. The first half of the programme focuses on that part of my life and in the second half we talk about my weight loss.

You and Sue have done this together haven’t you?

Yes, Sue weighed 16 stone at the beginning of all this but she’s nearer 10 stone now. 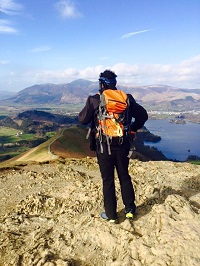 Me where I feel most at home - on a mountain

She found Slimming World worked really well for her and although she’s not a gym junkie like me she’s very fit and has really embraced the climbing. Sue and I both had high cholesterol and blood pressure but it’s normal for both of us now.

Sue doesn’t have diabetes but she had been diagnosed with a fatty liver and she’s managed to reverse that. It really has been life-affirming for both of us and has strengthened us as a couple. It’s certainly been a year to remember.