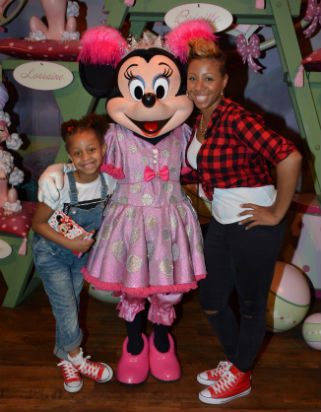 Annastasia Baker, 27, is a MOBO-nominated singer and single mum to Nevaeh, eight, who was diagnosed five years ago this month with Type 1 diabetes. They live in south-east London.

"My initial reaction to when Nevaeh was taken ill was ‘my child has something that’s not good’ and then once I heard about her diabetes, she had to start injections.

"Once the injections started, Nevaeh tried to get out of eating so that she didn’t have to have them, or I had to hold her down to make her have them.

"It was at that point I thought ‘I have got to face this every day’. That was the part that hit me the most. I was a single mum and I still am a single mum.  My shoulders felt quite heavy at that point."But the younger children are, the quicker they adapt to a new routine. Within three or four days, Nevaeh realised she had to do it. It was still hard but she didn’t fight anymore. You don’t have a choice because you know that pain is going to keep her alive. "I don’t want Nevaeh to feel that she’s different from any other child. In my own life, finding a way to keep things normal and the support I have from my mum and my friends is really important. My mum was there a lot of the days and she had taken time off work to help. Mother’s Day is a great time to appreciate and reward that commitment. "I have learnt that it’s possible to still live a normal life with diabetes. In the beginning you feel it’s going to change everything and ‘I’m not going to be able to go on’ but I have learnt that it’s doable. It could be easier but it’s doable." 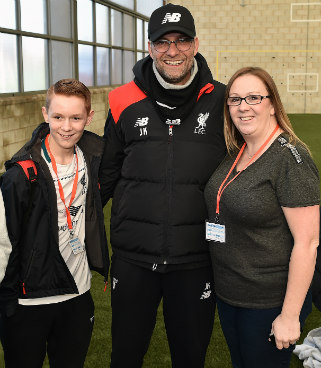 Charlotte Hennessy, 33, is mum to Liam, 13, Joseph, six, and Jacob, four. They live together in Connah’s Quay, Flintshire. Liam was diagnosed with Type 1 diabetes last summer. This February, he won Diabetes UK’sKop Idolcontest to find a Liverpool FC fan who is living with diabetes and has not let this stop them doing great things.

“Liam started getting symptoms last April (2015). He was taking ADHD medication and one day he came down the stairs and he looked so thin I thought he had developed some sort of eating disorder. I thought it was the ADHD tablets.

"He was drinking litres of water and becoming more and more lethargic. He was exhausted and he hadn't done anything too energetic that day. I took him to the doctor's and said to the GP “I do think he’s developed Type 1 diabetes”. I took him back three days later and, inbetween hospital appointments, Liam had gone to Chester Zoo where he was drinking Slush Puppies after Slush Puppies. The next day, I could barely wake Liam up and we went straight to the hospital.

"My advice would be to trust your instincts. There is nothing stronger than a mother’s instincts as no-one knows your child better than you do.

"Initially, I didn’t want my child to have this life-long condition.  But we have both just accepted it and we have both been really strong. I don’t want Liam to have a negative attitude about his Type 1 diabetes. Can’t take it away, can’t cure it. Liam controls his diabetes, he doesn’t let it control him.

It is devastating at first. I was so sad for Liam and then you feel guilty. A lot of mums will relate, but you just have to stay positive. More so to prepare Liam to manage his Type 1 diabetes as an adult. He does have down days but you’re going to…we all do. He does get fed up and I did say to him, ‘God only gives you what you can deal with.’

"Type 1 diabetes is so misunderstood. There’s a Facebook group called ‘Parents of Children with Diabetes in the UK’. I don’t always chat but some things I have learnt from other mums have been completely invaluable.  If I injected Liam after pizza, his blood levels used to have a massive spike. It was suggested I make the injections before he's finished the pizza, and they don't spike as much anymore."

"Winning Kop Idol was great for Liam’s confidence and he enjoyed every part of the day. As Liam’s mum, what I liked the most was that Liam has taken on board what Dr. Ryland (Morgans, Liverpool FC’s head of fitness, who also has Type 1 diabetes) has said to him. He’s been eating brown bread and he’s not having huge bowls of cereal. He’s really taken it on board. If his diabetic nurse had told him, he might not have paid as much attention but Liam is amazed that Ryland has Type 1 diabetes and is coaching Liverpool.” 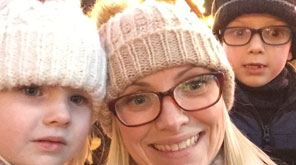 Adele Beckwith, 29, from Sittingbourne, Kent, is mum to Jayden-Tyler, six and Ava-June, four. Ava-June was diagnosed with Type 1 diabetes on Jayden-Tyler’s 6th birthday in May last year.

“Ava-June didn’t have any of the signs or symptoms of Type 1 diabetes. One minute she was fine and the next she’d collapsed as we were walking to school to pick up her brother. In the end we didn’t get a diagnosis for a few weeks because her only symptom was her high blood glucose reading.“She started on a pump at the beginning of September and that is working well but there is a limit. Ava-June isn’t hypo aware and we are still having to tweak things all the time, but it does give us a little bit more freedom.“Jayden-Tyler has been an amazing older brother. Don’t get me wrong, they have their moments, but when we’re doing her injections he’s there holding her hand and will even help work out her carb counting. But he has seen us worrying and panicking and it has definitely affected him. We’ve taken the decision to keep him involved and feel part of everything that’s going on. We don’t hide things from him.“Before she went on her pump I had a breakdown in the middle of a shopping centre. I just broke down crying. Jayden-Tyler was getting tested to see if he was coeliac and it was one of those ‘why is this happening to us’ moments and it had all come to a head.

“But I’ve learned not to be scared to ask for help. We get a lot of support from Ava-June’s nurse. I wouldn’t say it is getting easier but it does get more manageable. You also need to accept that you will have bad days as well as good days. “For me the really important thing is that my husband and I work as a team and we never leave each other out. Even though I’m Ava-June’s main carer, my husband is always helping. “My hope for Ava-June is that she grows up to do anything she wants to do. I’ll always encourage her to follow her dreams. I don’t want her to think she can’t go travelling or have the life she wants.“We want to make people more aware of diabetes and during Diabetes Week we are planning to hold a picnic in our park to do some fundraising. I will have some leaflets with me and will go up and chat to strangers about the condition. I just think it’s important for people to understand a bit more about it.”