A sailor with Type 1 diabetes has completed the Round Britain and Ireland race in record time.

Adam Pereira, 46, a professional sailor from the Isle of Wight, tackled the challenge in a Volvo 70 yacht and his team completed it in five days and 15 hours, shaving six hours off the previous record.

He now believes he might be the fastest person with diabetes to have sailed round Britain and Ireland. 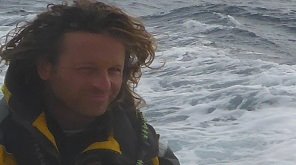 Is Adam the fastest man with diabetes to travel round Britain and Ireland in a yacht?

Diagnosed with Type 1 diabetes 13 years ago at the age of 33, Adam is passionate about people with diabetes being able to live their lives to the full. “Just because you’ve got Type 1 diabetes doesn’t mean you don’t have the right to have an awesome life,” he said. “I hope I’m proof positive of that.”

But Adam admits that he did have reassess his life when he was diagnosed. At the time he was working in the oil industry but his career came to an abrupt halt as he was no longer allowed to be on the oil rigs due to his condition.

“I was on leave at the time and I mentioned my symptoms – feeling tired, terribly thirsty and wanting to go to the toilet all the time – to my friend’s girlfriend, who was a GP,” he said. She immediately said it sounded like diabetes but instead of listening to her I foolishly just carried on and four days later went into a coma and ended up waking up in hospital.

“It was a big blow at the time because I’d spent years training and the industry had invested a lot in me. But that was it – I never stepped foot on a rig again.”

Thankfully, Adam was determined that his diabetes was not going to limit his life. “I’d always loved sailing,” he added, “and I thought maybe I could find a job doing something I really enjoyed so I decided to try my hand at boat-building and crewing.”

Adam has not looked back. Armed with a waterproof bag and a good supply of insulin, he has followed his dream. But he admits it isn’t always easy to be the perfect diabetes patient when you are literally all at sea.

“The Round Britain and Ireland race is one of the toughest tests a sailor can face because of our unpredictable weather and busy shipping lanes and it certainly lived up to its reputation,” he said.

“One of the most challenging situations was when we were hit by a squall - a localised storm - after rounding Dover. “Lightning was hitting the water around us and the rain was torrential, it felt like the end of the world. I was expecting Moses, God and Neptune to appear at once! We were doing 28 knots, which is incredibly fast.

“On top of that I have to manage my diabetes. When I’m racing I’m eating a lot of freeze dried food but at least I know exactly what I’m eating because it’s on the packet so I’m able to carb count.

“But my body does find it difficult to cope with the shifts we have to take for sleeping so I know that my control won’t be as good when I’m at sea as when I’m on land. I try and compensate by being extra healthy when I’m home but I probably get more nervous about seeing my diabetes nurse than I do tackling the ocean!”

Adam is now getting ready to cross the Atlantic in the yacht but even that is not enough of a challenge for him.

“My next goal is to enter an all diabetic international team in next year’s Fastnet race organised by the Royal Ocean Racing Club,” he said. “It's a big offshore event and I need to find sailors with diabetes – of any kind - who have performed to an international standard. I also want to include a doctor who has diabetes on the team. I’m hoping to raise awareness of the condition and prove that we’ve got what it takes to perform at the highest possible level.”

If you are interested in Adam’s Fastnet challenge and have diabetes and also the required experience, contact the pressteam@diabetes.org.uk and we will pass on your details to Adam.

(Image of the Volvo 70 yacht taking part in the Round Britain and Ireland Race courtesy of rick-tomlinson.com)