Congratulations to our runners at Bupa Great North Run 2011

A hugeto all our volunteers who ran for Diabetes UK in the Bupa Great North Run yesterday – the world’s largest half marathon.

Over 600 volunteers participated, and their hard work and determination is expected to raise an impressive £200,000.

Diabetes UK would also like to thank the supporters for showing great enthusiasm in cheering along our runners. At the finishing line, our fantastic runners were treated to snacks and a well deserved massage.

Some of our runners told us about their day:

"Really enjoyed it, will do it again, it is such a great cause."

“I really enjoyed it, the massage really hurts – but in a good way."

“Had a great time and was cheered along the route."

Lucy Jo, famous for her role as Katy Harris in Coronation Street, who had a high profile diabetes story line, gave support to her Dad who ran his first half marathon for Diabetes UK yesterday.

Lucy Jo said, "While my Dad has suffered some life threatening illnesses himself, he does not suffer from diabetes, but knows family and close friends who do. That's why I'm so proud of him running his first ever half marathon for this worthy charity and Al [Lucy Jo’s husband] and I would like to thank everyone who has taken the time and trouble to sponsor him."

Register your interest for 2012

If you have been inspired, register your interest in running for Diabetes UK in any of the Bupa Great Run series in 2012, by emailingGreat.Runs@diabetes.org.ukwith your contact details. 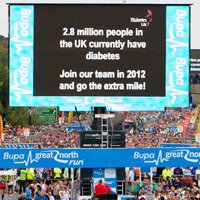 Diabetes UK is thrilled to be chosen as the official charity for the Bupa Great Run Series from 2012. The partnership is set to raise over £1 million a year, helping us to continue to support people with diabetes.

Bupa and Diabetes UK will also be working together to raise awareness of diabetes through a series of events around the country, helping people to take positive steps to improve their health.

Chief Executive of Diabetes UK, Barbara Young, said, "We are delighted to be the nominated charity, working with Bupa on the Great Run Series from 2012. Diabetes is one of the biggest health challenges facing the UK today, and physical activity helps people reduce the risk of developing Type 2 diabetes and to manage their diabetes to reduce complications.

"The fundraising efforts of runners will go a long way in helping Diabetes UK continue to support people diagnosed with diabetes, fund research into finding a cure and tackle the potential time-bomb of the seven million people at risk of developing Type 2 diabetes."

Bupa’s chief executive, Ray King, said, "We’re very much looking forward to working with Diabetes UK and hope to help them raise a significant amount of money to further their essential work. There are 2.8 million people in the UK diagnosed with diabetes, and an estimated 850,000 people who have diabetes but don’t yet know it.

“It’s estimated that 5 million people will have diabetes by 2025, so it’s vital that we encourage fundraising to fight the causes and consequences of this chronic condition.”