Diabetes Week gets the nation talking

This year’s Diabetes Week comes to an end on 18 June, after a week where Diabetes UK and our supporters have been working hard to raise awareness of the importance of talking about diabetes. We’ve been listening to you throughout the week, and finding out how our campaign has helped you to ‘talk diabetes’.

Diabetes UK launched Diabetes Week by releasing the results of a survey that found one million people could be risking their health by keeping their diabetes a secret. A quarter of these people had done so for fear of discrimination or bullying.

Sharing diabetes stories across the media

Many supporters backed the campaign by taking part in interviews to share their experience of struggling to talk about their diabetes. This included an interview on BBC Breakfast, one with the Daily Express, and an interview with Diabetes UK’s Chief Executive in The Guardian. Sonya and Samuel Bithell (pictured top) took part in a range of media interviews to share their experience of how people with diabetes can often be treated unfairly.

The charity held a parliamentary event on Monday afternoon, attended by over 20 MPs, to raise awareness of the difficulties people experience when talking about their condition. Prime Minister David Cameron also showed his support for the campaign during Prime Minister’s Questions.Diabetes UK Northern Ireland held an event in Stormont (pictured below) to highlight the difficulties children with diabetes face in schools. Over 15 Members of the Legislative Assembly attended and the Chair of the Assembly Education Committee has since shown an interest to follow this issue further. 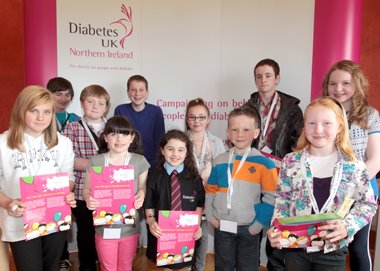 Welsh Health Minister Lesley Griffiths formally launched Diabetes UK Cymru’s campaign to offer Type 2 diabetes risk assessments in all Welsh pharmacies for a fortnight, and a third of Welsh Assembly Members attended an Assembly event to ‘talk diabetes’.In Scotland a Diabetes Week motion in Scottish Parliament attracted 30 signatories, and Deputy First Minister, Nicola Sturgeon, tweeted her support for the campaign at the beginning of the week.

All the money raised during the week will go towards expanding Diabetes UK’s Careline - and this week, Careline staff took part in live chats with supporters via Twitter, Facebook and a phone-in with BBC Radio Scotland.

Your time to talk

We’ve heard from various supporters throughout the week who have been inspired by our Diabetes Week campaign to talk about their condition. A number of our celebrity supporters including Phillip Schofield, Melanie C and Dr Hilary Jones, also tweeted their support.

Comments included:“Since next week is Diabetes Week, I’m working myself up to letting those in my life know that I have diabetes. It’s a hard thing for me to do but I figure I can’t try to raise awareness of diabetes and encourage people to speak about it if I don’t. Just need to be brave! I hope I can do it.”‘It is officially ''Diabetes Week' - Let's get talking about it. Do you know, some people do not even tell close friends and family they are diabetic because they are ashamed. I urge you all, to be upfront, stay safe and educate others.’“Just went to check my emails and the front page had an article for Diabetes Week, headlining that one million people with diabetes keep it a secret putting their health at risk. I was one of the million people for years and am now suffering because of it. So please don't risk problems in the future by keeping it a secret. Talk about it please.”