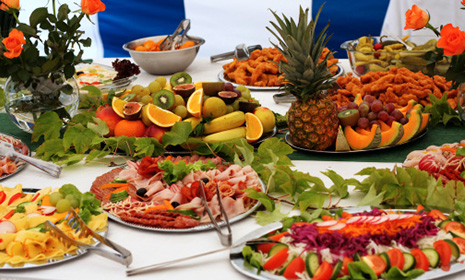 We look at how people with diabetes can manage ‘domino dates’ – those events, like summer barbecues, picnics and buffets, where the eating and drinking doesn’t have a natural ending in the way eating a meal does.

They’re the occasions where, if we’re not careful, our nibbling and drinking can get out of control eventually affecting diabetes management, especially if you’re attending a few events like these in a row.

For people with diabetes this can be particularly problematic, but you can create your own story around this kind of eating and teach yourself to regain control.

What are ‘domino dates’?

Unlike a usual meal that's finished once our plate is empty, food at 'domino dates' often lack this same sense of 'completeness' or being finished – we can always have one more chicken wing, nibble on a few crisps while we're chatting, or have another drink... It's up to us to control ourselves and that's often where the difficulty lies.

There is a lot you can do to gain control over these 'domino dates', if you'd like to. I'm willing to wager that this summer isn't the only year you've had a picnic, barbecue or buffet to contend with. How have you dealt with them in the past? When it comes to eating, we forget that we can learn from our previous experiences, habits or 'scripts' of eating, to help us decide how we want to do it this time in the here and now.

Whether it's a barbecue, picnic, holiday buffet or something else you've got coming up, think back to the last time you experienced one of these events, or even better, the last two or three occasions. It's likely that there's a way you predictably 'do' each of these type of events. For example:

Did you promise yourself beforehand that you were just going to eat 'healthy' and then on the day found yourself unable to resist the delicious array of food and ate much more than you'd planned or wanted to?

When it comes to eating, we forget that we can learn from our previous experiences

Create your own story

Now you've thought about your own story of how you've approached a 'domino date' in the past, are you happy with it? Remember these are simply stories – no one's saying they're 'good' or 'bad'. Food can be a pleasure and should be enjoyed. It's just possible, however, that there's another story you could create that would serve you better.

What are some new 'stories' you could develop around food? How about...

Holidays and days off are a time to relax and forget about the usual stresses of life, and while we might like to forget about and ignore the demands of diabetes, doing so can often lead to more stress and difficulty in the long run. By taking a few minutes to think ahead about how you can enjoy food and look after your diabetes needs, you'll ensure you're feeling more in control of your choices, health and your overall wellbeing.

10 tips for healthy eating with diabetes
Eating for diabetes and heart health
What can I eat with gestational diabetes?
Healthy eating