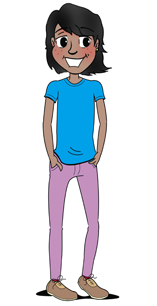 I have coeliac disease as well as diabetes. It means that if I eat foods that have got something called gluten inside, it gives me an upset tummy. Gluten isn’t in everything, but it is in a lot of carbohydrate foods. But there are special ‘gluten free’ versions of those foods that I can eat.

Can you catch coeliac disease?

No. Coeliac disease isn't catching. But it is more common if you've got Type 1 diabetes.

How would I know if I had coeliac disease?

You might feel really tired all the time, have a runny tummy or tummy ache, and you might lose weight. But lots of children don’t have any symptoms at all. Only a doctor can tell you for sure if you have it. If your doctor thinks you might have coeliac disease he will do a special blood test and ask you to see another doctor who knows all about coeliac disease.

Will coeliac disease ever go away?

Just like diabetes, doctors can't make coeliac disease go away. But if you stick to special gluten-free foods you shouldn't get any more tummy aches or runny tummies, and you won't feel so tired.

"I have diabetes, coeliac and an under active thyroid. I would rather have none of them!"- Amy

"Hi I'm lucy. I've only ever met two people with both diseases before. I also find it a bit hard sometimes, but I would rather have just coeliac." -Lucy

Nicola has diabetes and coeliac disease. Read her story.