Running for Diabetes UK makes me feel part of a team

Robert took part in the Great Scottish Run because his family has been touched by diabetes. 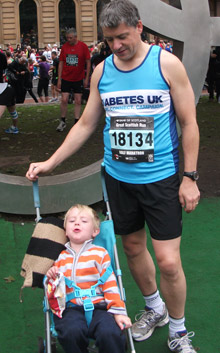 Runners have many different reasons for taking part in the marathons, half marathons, 10Ks, 5Ks and walks in Scotland over the course of a year.

Some do it for the pure love of running. Others do it because they want to show their appreciation and support for a charity that has helped them, and to raise funds.

Robert Pickett (pictured, right) from Greenock is taking part in the Great Scottish Run on October 6 of this year because his family has been touched by diabetes, and he wants to all that he can to help Diabetes Scotland to care for, connect with and campaign on behalf of other families living with the condition.

When Robert’s son Cameron was just three, he became quite poorly and began showing symptoms that suggested he was suffering from diabetic ketoacidosis (DKA). Robert and his wife Claire were naturally shocked by the news.

“Our doctor thought that Cameron just had a bug, but he got weaker and weaker – he was tired, and really thirsty all the time”, says Robert.

“In the end we had to take him to the Out of Hours doctor at the hospital in Paisley. Recognising the symptoms straight away, she did a blood test which confirmed that Cameron had Type 1 diabetes and had developed diabetic ketoacidosis (DKA). She told us that had we waited just another day or two, he might not have made it.

“It really brought home to us just how serious diabetes is, and as parents we asked ourselves if it could be something we had done. I used to work as an engineer, and I like to think I can fix just about anything, but I knew that I was helpless in fixing Cameron’s diabetes.”

Robert, a manager and former engineer with British Gas, and Claire, an NHS endoscopy co-ordinator,  were really touched by the care and support shown by the medical team who helped the family to adjust to Cameron’s diagnosis.

“The team who helped Cameron were brilliant and so supportive. Having a child with diabetes takes so much adjustment - having to inject him with insulin every day just seemed so cruel,” Robert adds.

Cameron, now aged five, has started using an insulin pump.  Although this took further adjustment by the whole family, Robert and Claire are really pleased at how well Cameron is managing.

“It really has made such a difference to him,” says Robert. “Cameron is a very happy wee boy and has inspired adults with diabetes who have commented on how well he’s managing.”

To show support for other families who have had a young child diagnosed with diabetes, Robert will is doing the Great Scottish Run Half Marathon in October.

“I’ve taken part in the Great Scottish Run before, but last year was the first time I’ve run for Diabetes UK Scotland and I’m looking forward to doing it again this year. I love anything to do with the outdoors, and I’m looking forward to when our wee fella is old enough to join me in outdoor activities. I guess you could say that I’m blazing a trail for him by doing the run. The difference in running for the charity is that it’s great to see others wearing the same vest and you feel part of a team,” adds Robert.

Places are available in the Great Scottish Run for 2014. If you would like further information about taking part in the run to raise funds for Diabetes Scotland, please contact the Fundraising Team on 0141 245 6380 or by email at scotlandfundraising@diabetes.org.uk