Time for a second life

When Heather was diagnosed with diabetes at the age of 54, she resolved to see more of the world – and 'get on with things'. 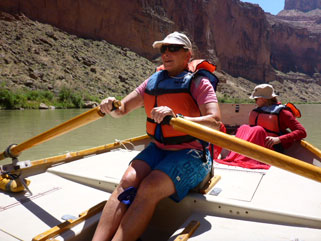 Heather having a go at rowing a dory

We can all have two lives – the second one begins when we realise we only have one. For me that was in October 2004 but the story begins a few months before that in the May of that year.

I was eating like a horse, drinking water by the gallon and had lost three stone in weight very quickly. I craved sugar and in particular Boaster cookies. Two packets a day. And cream cakes in pairs at the weekend.

I Googled my symptoms and came up with diabetes or thyroid problems. I thought I’d go for the thyroid because it was much easier to treat. So why on earth did I bury my head in the sand rather than go to my GP? I am a pretty rational, sensible person. Delaying treatment of either was stupid. I was stupid.

My clothes hung off me and looked awful but I wouldn’t buy any smaller ones – sub-consciously I knew I would regain the weight – when I was treated. My boss urged me to go to the doctor – she said I couldn’t eat the way I was eating and lose so much weight without there being something wrong. Stubbornly I refused. I had never before been able to eat as much as I liked without putting on weight.

One Friday in May I had an appointment to see my doctor at 4pm but to this day I can’t remember the reason except that it wasn’t anything to do with my weight loss.

During the consultation I let slip something which caused my doctor to jump out of his chair and rush out of the room. Shortly he re-appeared with a glucose monitor and tested my blood sugar level. The result was twenty eight point something when it should have been between four and seven.

He reached for the phone and called Addenbrookes’ Hospital asking to be put through to the on call registrar. “What should I do with her over the weekend?” he asked. I couldn’t hear the reply but when he put the phone down he said “I was told to stop panicking; you have been like this for a few weeks so I should start you on some pills and ask you to come back next week.” I walked out of the surgery in a daze and drove to hospital to visit one of my daughters. What a joy to be told I could take her home for dinner for a couple of hours rather than visit in a small hospital room. I did not spoil the time telling her of my diagnosis – that could wait.

What should I do with her over the weekend?

Over the next few weeks the pills were increased until I started rattling and my weight loss stopped. I did not however regain any weight.  I refused insulin because my partner and I were going to Canada in late September for a couple of weeks and I didn’t want the bother of keeping insulin cold. Another bit of mis-information. Insulin keeps for 30 days without refrigeration.

On our return in mid October I was prescribed insulin and assured no syringes were involved – it would be in a pen. I had had a needle phobia since I was four years old when after a premed I was taken in for an operation and given anaesthetic in a syringe one foot long – or so it seemed to me. So that afternoon the nurse was to show me how to administer insulin from the pen. First she showed me how to put .......the needle on! No I did not do needles! I was unable to push the needle into myself and eventually she did it for me telling me I’d have to do it myself in the morning. My partner at the time refused my request to come over in the morning and help me – why didn’t I dump him then? Anyway after an hour of hovering a needle over my stomach I eventually sunk it into the skin and injected for the first time, gobbled down my breakfast and rushed off to work. Later I was to admit that the injections were far less painful than the finger pricks to test my blood.

I was in my mid-fifties and so my GP told me I was a type 2 diabetic. One of my daughters who was training to be a doctor assured me that with my life-style there was no way I was Type 2 but not to argue with my doctor because the treatment of a type 2 diabetic who couldn’t be treated with pills was the Same as a Type 1 diabetic. About a year later after a cholesterol test my doctor admitted that my cholesterol ratios suggested I was actually type 1 and rather unusually I had not developed it until late in life rather than as a child which is the more normal time. I considered myself very lucky – I could have been injecting myself for most of my life with all the detrimental effects associated with long term insulin use.

Of course nothing had really changed – we get old, some of us continue being able to do things while others have to “wind down”. It got me thinking. Maybe I should get on with a few things. My father had saved a lot of things to do when he retired. He was going to have a very full life – when he retired. He was still selling his share in the firm to the other partners and working one or two days a week when he died. That was not going to happen to me. I was fifty four and had seen very little of the world.

I did have my first holiday alone in 2007. It was a multi-activity holiday in the Dolomites with fifteen other single people. Eight years later and I still have two weekends a year away walking with six of them.

In November 2008, I found myself trekking in the Himalayas followed by the Lost World and Angel Falls in Venezuela in November 2009.

In 2010 I started with a very enjoyable but not exactly adventurous activity holiday in Turkey. We walked, white-water rafted, tubed, canyoned, cycled and sea-kayaked during the day and at night partied until the early hours. Falling into bed at around 4am each night it was amazing that we were up by 8am and raring to go for the day’s activity. Weekends in Dublin and Newcastle followed after each of which I needed a holiday! My next trek later that year was to be the Inca Trail and Autumn 2011 found me heading to Buenos Aires to trek the Torres del Paine Circuit in Patagonia.

In June 2012 I spent ten days canoeing four hundred kilometres down the Yukon. That autumn I opted again for an easy walking holiday on Crete. Not adventurous but very enjoyable with a lovely group of single people none of whom I have seen since! Early in 2013 I took up white water kayaking and then canoed the flat-water bit of the Zambezi for my summer 2013 trip.

Spring 2014 – my first trip planned since I had retired in May 2013. I decided on two back to back trips in South East Asia. Autumn 2014 I went to India for a week of tiger spotting. We also visited the Taj Mahal and Agra Red Fort and travelled on the infamous Indian trains overnight. On our return to Delhi I caught a plane to Bangalore to meet my next group for a cycling holiday.

A recent trip to civilised USA was a truly a life changing experience. I may never return to the Grand Canyon – when a trip has been so good returning surely can never be as good. But my two weeks travelling the 240 mile length of the Grand Canyon by dory has had a profound effect on me – 150 rapids were so much better than I expected and yes there was so, so much more. I have been sucked in to the whole Grand Canyon experience and am reading up as much as I can about its history and the tales of those who have travelled its length – a few of them hundreds of times like some of the four guides who took my group down. Lew, Doc, Regan and Jim – I respect you so much. I put my life in your hands and you looked after it. Thank you – I only have one second life and I’m living it.