How did I get involved with Diabetes UK? I blame my Union

Arthur Smart, 67, who was diagnosed with Type 2 diabetes in 2006, was named Diabetes UK’s East of England Volunteer of the Year in 2016.

Arthur calculates that he might have had Type 2 diabetes six to eight years before he was diagnosed. He raises awareness of the condition in his community and provides support to others by speaking at events, and is a regular on diabetes education stands at healthcare and community events. He has also re-opened his local Diabetes UK group, of which he is secretary. 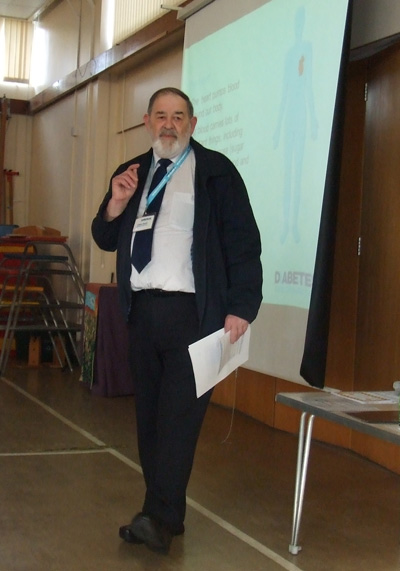 It was Christmas Eve 2005, I had been feeling rather poorly, suddenly a “Volcano” on the back of my neck erupted sending forth its “larva”.  I was able to see a GP at my surgery after Christmas and treatment commenced. I was seeing the Health Assistant regularly for treatment and dressing. After a few weeks with no sign of healing my GP happened to call into the nurse’s room and he took a look. A date was arranged to meet him in the minor operations room, eventually removing a cyst.

My treatment then had to be undertaken by the nursing Sisters as the wound had to be packed to allow healing from the inside. Healing appeared to be slow until one of the Sisters gave me a sample bottle and told me bring it back in the morning. The bombshell then dropped, a blood test completed, Diabetes Type 2 confirmed. Treatment for diabetes commenced and the wound healed.

I was fast tracked to see the practice Diabetes Nurse, went over a few basics and calculated that I could have had diabetes for six to eight years. I was “gobsmacked” at the diagnosis at first, it put me down, and then I picked myself up as I realised there was life with Diabetes.

I was a BT worker at the time on full time release as Health and Safety Officer for the CWU East Midland branch. On the following day I was in the Union Office and was able to have a good heart to heart with a colleague who had Diabetes Type 1, getting no work done but education was great!

There was no education as such at that time and I came across the Diabetes UK website and became a member, and my education commenced.

As Branch Safety Officer, I had to attend the CWU Midlands Health and Safety Forum. In 2007, when asked to give a presentation on a topic, along with other delegates, I suggested diabetes and this was accepted. I did some hard research and duly delivered my presentation.

The next year (2008), diabetes awareness was chosen as the health topic for BT’s annual staff Workfit campaign. The union held a Health & Safety day at a major BT building in Nottingham, Becky from the Nottingham Office of Diabetes UK attended, bringing a full suitcase returning to her office with it empty. During an afternoon cuppa, everyone agreed that it had been a resounding successful day. It was during this event I soon realised that there was a lot of diabetes education required, even in families where diabetes existed.

A couple of months earlier, I’d taken some leave at a time when I had difficulty controlling my blood glucose levels, during my time off my levels returned to normal. It was towards the end of that leave that I received my pension papers as I was fast approaching 60. It was not a hard decision to take – if leave brought my levels down to normal – retirement would be good.

With retirement in mind, I looked at the volunteering section on the Diabetes UK website; Diabetes Awareness Speaker would suit me. I attended the speakers’ course in September 2008 and have since given many talks including one last year to deaf people with a signer at my side.

I’ve also provided awareness stalls at professional conferences and wellbeing events. I have been invited many times to help out with Addenbrooke’s Hospital Patient Days and was asked one year to talk on Diabetes UK’s services. I must also remember the Queen Elizabeth Hospital event when I was invited by my specialist nurse to provide awareness stall, both hospitals providing a good Diabetes care team.

Memorable moments as a volunteer

My best experience – visiting a field beside the A10 near Hilgay to receive a cheque for Diabetes UK from Ferguson Heritage for £605 and sitting down to a ploughman’s lunch in the open air amongst a group where the majority of its members had diabetes.

On a Saturday at the recent East of England Show at the Peterborough Showground with a bitterly cold wind blowing, I stood on the Diabetes Stand when I spotted a couple heading towards me as if they desperate to catch the last bus home, the man wearing a cloth cap and the lady a hair scarf – a farm labourer I thought – he was! They approached with long sad faces and I said hello, can I help you? The lady replied he’s waiting his test results. I had to get them to smile so I said 'I’ve been there, done that,' and lifted my sweatshirt, 'and I’m wearing the tee-shirt'."  With a smile on their faces the lady said “You’ve got it?”

Along the way I have been able to reopen the Wisbech Group, a small membership – I must point out no membership requirements – we are very grateful to Tesco for providing facilities. Whilst we are not fund fundraisers we do support The Big Collections at the Tesco store in Wisbech.

On receiving his awards from Diabetes UK

Two great words – thank you – nice to give and receive.

It is the icing on the cake when an award is given, I have managed a few (Arthur also won the Campaigning and Raising awareness award – and last year won the Supporting Others award) it is gob smacking, it makes you feel Humble.

Not only that I have had the privilege of visiting two schools  to present the Good Diabetes Care in School Award – thank you.

I consider having had a great day if I have helped at least one person.

I blame my Union for getting involved with Diabetes UK – what’s your excuse?