No longer relying on insulin after changing my lifestyle

Ben changed his lifestyle to help his depression and his marriage 13 years after being diagnosed with Type 2 diabetes.

Told he had the condition at the age of 31, it wasn't until the age of 44 that Ben was prompted to take action. He has so far lost three stone, is exercising regularly and working from home as an antiques dealer. A different lifestyle has also brought him the unexpected benefit of no longer having to take insulin after previously taking 40 units twice a day. 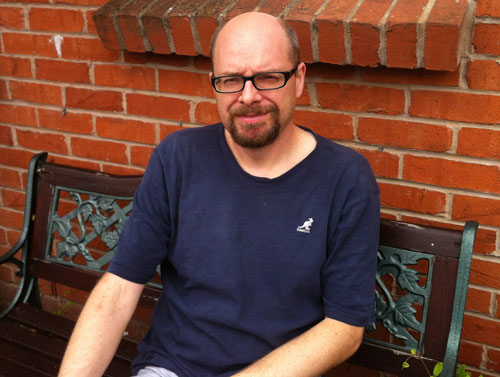 The lead up to Ben's diagnosis was dramatic: police stopped traffic in both directions.

In February 2003, I was working as courier for a life insurance company in London, long hours sitting in a car and lots of stress to meet targets coming from the bosses. This meant my diet consisted of petrol station sandwiches and endless bottles of Lucozade to keep me going.

I had always carried a bit of a tyre around my waist but that lifestyle made me fatter and more unhealthy.

I had been to my doctor because I was getting sharp pains in my abdomen, after some blood tests he diagnosed a fatty liver and the pain was probably caused by pressure on the blood vessels.

My blood test results also show very high triglyceride lipid levels, ‘close to death’ were the sort of phrases he used. At that stage he missed the diabetes (something that he later apologised for).

Around two weeks after the tests I was having a massive row over the phone with one of my bosses about me being stuck in traffic and missing an appointment and suddenly I had chest pains and a shortness of breath. I pulled the car over and parked up (on double yellows) and because of my recent blood tests I was convinced I was having a heart attack. After five minutes I looked out of the window to see a police van filled with officers parked next to me. They obviously had come to same conclusion and jumped out, stopped the traffic in both directions and called a rapid response ambulance, a panic attack was the conclusion but I was still admitted into Newham (East London) Hospital for a week – where Type 2 was diagnosed (a rough time for my wife! our first daughter was only a few months' old at the time).

I was put on gliclazide and metformin and statins and received very little advice about how to control the condition. There was lots of conflicting information about diet: how many carbs etc: some people said eat lots of starch, others said avoid it. But I was never told why. I had to learn about these things for myself. Obviously carbs stop you from having hypos but the wrong sort give you massive spikes and drops in blood glucose – all info that took me several years to figure out.

In 2004 we moved to Oakham, East Midlands for a less hectic life! My weight and HBAL1C levels slowly rose over the years. I was always told at my annual reviews to lose weight but I always thought that was general health advice – no one ever said lose weight and it will be help you manage your diabetes. I just thought I was stuck with it. In 2013 my annual blood test showed my HbA1c was 10 per cent, so I was put on insulin which helped control the glucose but I did start having lots of hypos.

Glucose drops and spikes caused me to get depression, quite bad sometimes to the point where my marriage began to suffer, I was also starting to drink quite a lot, sometimes 40-50 units a week, which I concluded was adding to the depression. In Feb 2016 I stopped drinking, haven’t touched a drop since and I also began to look into foods that I thought might help  my mood (chicken, nuts, berries, leafy veg etc) I also cut out all bad things (crisps, doughnuts, etc). In 3 months I have lost 3 stone and counting.

In March 2016, a Sunday, I went to the theatre 10 miles from home, before I left I took 50 units of insulin and had a baked potato for tea, ten minutes later I tested my sugar (as you have to before you drive now) it was 4.3, so I had some bread. By the time I reached the theatre car park my sugar was 3.9 and I was wobbling! In the theatre foyer I had half a pint of coke, then another half, my sugar went up to 4.5 but came straight back down to 3.8, so I called 111 and they sent an ambulance. I spent one night in Peterborough hospital and was referred back to my GP.

The conclusion was that due to the weight loss and much better diet with practically no bad carbs my pancreas was producing more effective insulin. So I’m no longer on insulin and haven’t been for five months. I’m sticking to a teetotal healthy life style with a hour in the gym six days a week. It’s not hard to stick to this regime when you know how much good it does. At 44 I feel like my life is starting all over again, blood sugar normal, bags more energy and enthusiasm and no depression.