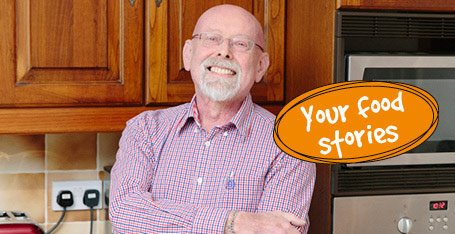 Ian, 65, is from Tunbridge Wells. He and his wife both have Type 2 diabetes. Ian does most of the cooking.

“My health problems started nearly 30 years ago when I was diagnosed (eventually) with sarcoidosis. Treatment involved steroids which I still take, as well as a variety of other immunosuppressants. The long-term steroids induced diabetes about 10 years ago and it was – initially - controlled with tablets. In 2006 I was diagnosed with non-Hodgkin lymphoma and during chemo I couldn’t control blood sugar levels so I started on insulin.

“My wife had been diagnosed with Type 2 diabetes in 1998 which, in a way, made eating easier. For 30 years or so we’d eaten reasonably healthily – fairly low fat, low(ish) sugar etc. For me, perhaps the biggest difficulty is portion size, particularly when on a higher dose of steroids, as they depress the feeling of fullness and you can just go on eating and eating.

“I'm now careful to watch the amount of rice or pasta that I have and tend to have more green vegetables, like broccoli or green beans, to make up for that. I don't deep fry; with non-stick pans, one hardly needs any oil to cook things.

“Basically, with diabetes, you can still eat what you always did – but preferably not too many pies, which are often loaded with fat. A useful measure on labels is the calorie content of foods. If you're not doing heavy physical work you won't use all the calories and they'll end up around your waist!

Balanced diet is key for people with diabetes

“One key thing for people with diabetes is to eat a balanced diet. You can still eat carbs but just keep an eye on how many. You also need to watch out for hidden sugar in foods. Many low fat foods have extra sugar, eg some cereals have honey or syrup added. Likewise, some low fat yogurts are loaded with sugar.

“At home, lunch is often a home-made soup. If you make it yourself then you know how much salt has gone in and you can add your favourite vegetables. I make up a batch and freeze it. Again, I make a batch of curry, meatballs or casserole and always have something that can be defrosted quickly. Since a meal can be ready in a few minutes, there’s less temptation to get a takeaway or make something less healthy.

“When we’re eating out, it’s just a matter of eating sensibly and not filling up with sticky toffee pudding! Unfortunately, some of the chain restaurants still only offer dessert options that are heavily laden with sugar. They need more healthy options. That said, I’ve never had a particularly sweet tooth and prefer savoury treats.

10 tips for healthy eating with diabetes
Eating for diabetes and heart health
What can I eat with gestational diabetes?
Diabetes and food
Healthy eating