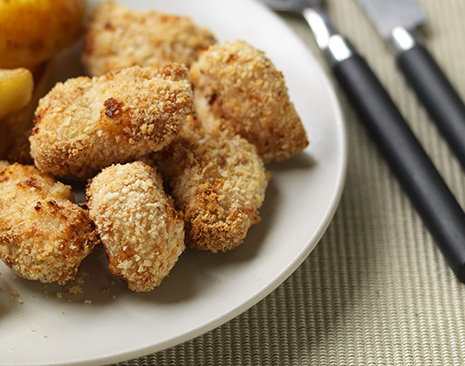 Invented by a food scientist in the 1950s and popularised by fast food chains in the 1980s, chicken nuggets are now a firm favourite with children – yet up to half the average chicken nugget isn’t actually chicken.

There has been much debate about what’s in them. Generally containing around 40-55 per cent chicken meat, the rest can include fat and skin. Nuggets also contain breadcrumbs, sugar, salt, flavourings and fat picked up during deep-frying. So it’s worth reading the label as they vary a lot. If you’re eating nuggets in a fast food restaurant with dipping sauce and fries on the side, the calories, fat, salt and sugar really start to stack up.

These healthier, oven baked nuggets are over 70 per cent chicken and far lower in fat than shop bought. As an alternative, try cooking with fish to create cod goujons or for a vegetarian and gluten-free version try these tofu goujons.

Recipes for you to try:

Make these healthier versions from our recipe finder.