"Even healthy eaters indulge in a treat now and again." 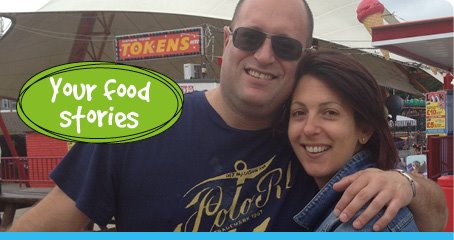 Richard, 41, from St. Albans, has Type 1 diabetes. His wife, Tash, tells us how the diagnosis has affected the family’s attitudes to food.

“I’ve always been clued up about healthy eating – my idea of ‘healthy’ is probably very different to other people’s idea of ‘healthy’! To be honest, Richard’s eating habits changed much more when he first met me than when he was diagnosed – by that time, we’d had the children and I’d already established a healthy, balanced diet for the whole family. So really, the diagnosis hasn’t affected the family’s eating habits much at all.

Myths around diabetes, sugar and carbs

“You must eat carbs – it just needs to be the right sort and the right amount. In fact, calculating carbs is the starting point when I plan meals for the family. I use an app to help me with some of the calculations. It’s based on portions rather than weights so sometimes a little bit of guesswork is required but generally it’s been very useful.

“Richard’s taken complete control of his condition. He’s assumed full responsibility for what he does and doesn’t eat and is in tune with his eating. As long as it’s done responsibly and in moderation, Richard knows that he can eat the foods he loves. Of course, if one of the children had Type 1 diabetes then I’d obviously have to keep a much closer eye on what they were eating and drinking and it’d probably have a much bigger impact on our food shopping and eating habits.

“Richard does enjoy the occasional chocolate or a wee dram of whiskey – even healthy eaters indulge in a treat now and again.

10 tips for healthy eating with diabetes
Eating for diabetes and heart health
What can I eat with gestational diabetes?
Diabetes and food
Healthy eating