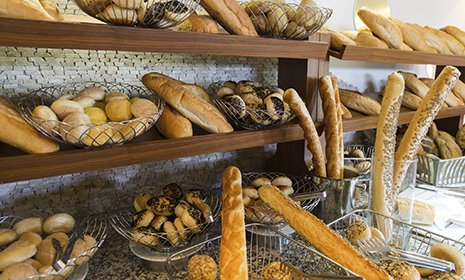 Gone are the days when all you can find in your supermarket is white, ready-sliced bread. There are so many different types of breads available now, so your choice really is only limited by your imagination. And, if you’ve got diabetes, you may also want to think about other factors, such as carbohydrate content and how much fat and how many calories are in the bread you’re eating.

Carbohydrate requirements vary between individuals and depend on age, gender, weight and physical activity. TheReference Intake (RI)of carbohydrate is 230g for women and 300g for men. These figures are just a guide and are based on the requirements of an average woman and man. Depending on your nutritional goals, you may require less.

Most supermarkets and local markets contain different types of bread. Here’s what you need to know next time you’re choosing a loaf.

Serve warm with jam or pure fruit spread for an indulgent treat.

Serve with your favourite Italian dishes, and try to buy ready sliced so you can control your portion sizes and freeze the rest. This way, you won’t be too tempted to polish off the whole loaf. Look out for reduced-fat garlic bread, but bear in mind it's still fairly high in fat and calories.