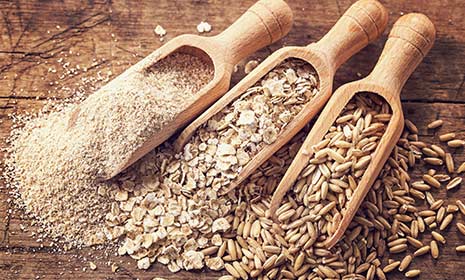 Grains of goodness: a closer look

Eaten as a staple food across many parts of the world, grains exist in our diets in many forms, offering an important source of energy.

It’s common knowledge that whole grains are good for us, from rice and wheat, to barley and quinoa.

Much of the nutrient goodness of grains are found in the bran and germ of the seed, which is why it’s important to

eat grains without these parts being milled off first – this is what the term ‘whole grain’ refers to.

Grains in your diet

Whole grains are wonderfully versatile – add them to salads for texture, bulk up a soup or stew, blend them in burgers or use directly as a meat alternative, or combine them whole in baked goods.

They aren’t hard to include in your everyday eating routine and a little whole grain goes a long way!

What do wholegrains contain? 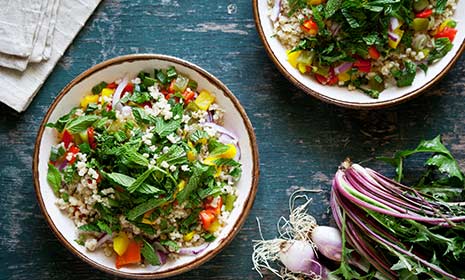 Cooking most grains is very similar to cooking rice – simply add the dry grain to a pan of water or broth, bring to a

boil, then turn down the heat and simmer until the liquid has been absorbed. For a healthy boost of nutrients,experiment with different grains in different forms to bring variety to your meals.

Which grain to choose?

With roughly 60 varieties in total, amaranth is not technically a grain but is of similar nutrition value and usage. These tiny grains have a slightly peppery flavour and can be cooked in water, popped like corn or added to baked goods to increase protein content.

For those seeking high fibre, you don’t get much better than barley. Often found as a flour, barley makes a closely textured bread with a slightly sweet flavour.

Related to rhubarb, buckwheat is also not a grain as such, but is used in much the same way. It works well as a flour substitute for noodles, bread and pancakes.

Also known as maize, corn is a grain when dried and a vegetable when fresh. Often made into popcorn, cornbread and tortillas, corn is widely used. It also doubles up as a starch and as a sweetener in the form of corn syrup.

Freekeh is harvested green wheat which is then roasted and rubbed. A firm, slightly chewy grain with a distinct earthy, nutty, smoky flavour.

An important staple food across Africa and India, millet is made from lots of different varieties of tiny grains. Commonly used in bread, certain types of porridge and beer, millet can be prepared to be creamy like mashed potato or fluffy like rice.

Known as ‘rolled oats’ as steamed, flattened whole oat grains or as more robust ‘steel-cut oats’ when chopped, this grain makes an ideal coating for fish and chicken, used as a crumble topping, for bread-making and, of course, as porridge.

A valuable source of protein, quinoa comes in a variety of different colours but it most commonly eaten in red, white and black forms. Use as an alternative to cous cous and rice to accompany main meals or add to salad year-round.

One of the better-known forms of grain, white rice has the germ and bran removed, while brown rice is left intact.

Made into a spongy pancake-like bread in Africa, teff is a tiny grain and is never refined. It’s extremely simple to cook and works especially well for baking.

This grain is made from a combination of wheat and rye. As a flour, it can be used to make biscuits, crisp breads, cakes and muffins or, as rolled oats, in breakfast cereals.

Hard wheat is high in protein and contains strong gluten while soft wheat is the opposite. In the UK, soft wheat is more common and is used widely to make pasta and cous cous.

Try our range of wholegrain recipes to up fibre and nutrients in your diet...