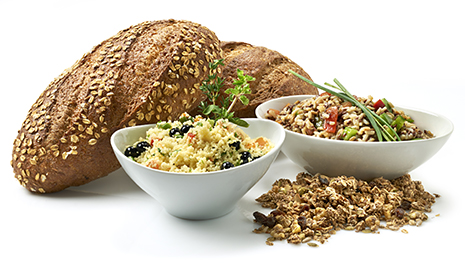 When it comes to your diet, you probably already know you need to eat less saturated fat, salt and sugar and at least five portions of fruit and vegetables a day. But did you know that wholegrains should also feature? As a nation, we are not eating enough of them.

Wholegrains are the seeds of cereal plants such as wheat, maize, corn, rye, barley, oats, rice and quinoa. In their natural unprocessed state, grains consist of three parts:

Wholegrain foods, retain all three parts of the grain. They may be eaten whole (eg brown rice and oats), cracked (eg bulgur wheat), or milled into flour and made into foods like bread and pasta. To qualify as a wholegrain, a food must contain 51 per cent or more wholegrain ingredients by weight per serving.

Why are wholegrains a healthy choice?

Some studies have shown that healthy diets, rich in wholegrain foods, can reduce the risk of heart disease, stroke, certain types of cancer and Type 2 diabetes. The ways in which wholegrains help prevent these conditions are not fully understood. They can play a part in maintaining a healthy body weight over time as part of a healthy, balanced diet and help keep your gut healthy due to the compounds they contain called phytochemicals. Studies also suggest that wholegrain foods may be more filling than their refined counterparts, which may help reduce the urge for snacking between meals and help people manage their weight.

In the UK there are no official recommendations, but most experts recommend at least three servings a day. It’s important to replace refined products with wholegrain foods to help keep your blood glucose and weight in check in the long term.

Are there gluten-free wholegrains?

If you follow a gluten-free diet there are plenty of gluten-free wholegrains that you can enjoy such as brown rice, quinoa, uncontaminated oats, millet, sorghum, teff and buckwheat.

What’s the difference between wholemeal, wholewheat, wholegrain and granary bread?

Wholemeal, wholewheat and wholegrain bread are basically different terms for the same thing and all are wholegrain. However, granary bread is slightly different and refers to bread that contains malted wheat flakes that are added to give it a characteristic texture. This may or may not be made from wholemeal flour, so you will need to check the label. Wheat-germ bread is made from white flour to which a portion of wheat germ has been added back, it is not wholegrain.

How to eat more wholegrains

There are plenty of simple and tasty ways to introduce wholegrains into your diet.